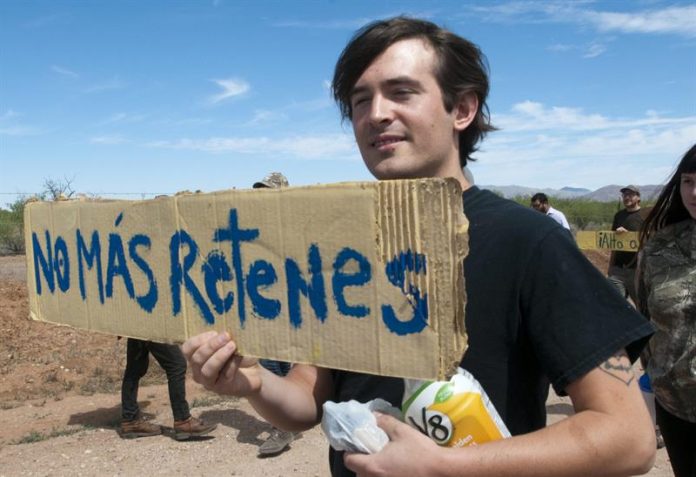 The San Diego Committee of American Friends published a report today showing cases of mistreatment by federal agents at international checkpoints, which they say are feared to be the “daily bread” of border communities.

For two years, the agency documented dozens of complaints from people who claim to have been abused by members of the US Customs and Border Protection (CBP) when inspected at both land and air checkpoints.

One case was that of a woman with legal permanent residence who was handcuffed and required to remain kneeling, with her hands on her head and handcuffed to a metal bench for almost an hour while they checked her vehicle.

It all started when an officer in the San Ysidro checkpoint asked him to open the trunk of his car, but when he could not open it he was handcuffed and taken to the second inspection area.

“The most humiliating thing of my life that they have stuck me in an iron bench and they have put a chain to me, like a delinquent and I am not a delinquent”, narrated the woman who requested anonymity but whose case is quoted in the report.

The matter became more complicated for the woman, because when arriving at its house in San Diego realized that they had not returned his card of legal resident to him so that it returned to the sentry box.

Officials told her they could not find her document so she had to request a new one, which involved an additional expense that she did not contemplate, more than a year has already passed and the card is still missing, said the woman.

The report entitled “Abuses on the US-Mexico Border” brings together 51 cases of people who have entered the country through different points of entry, such as the land registry and a case of the New York airport.

Among the findings is that in 94 percent of the cases cited in the report there was some verbal harassment by customs officials.

In 90 percent, they were not told that they could file a complaint and in 52 percent of cases, they were sent to secondary inspection without any explanation.

“We are concerned that this is the bread and butter of how border agencies are treating those who cross the border,” said Pedro Ríos, director of the Committee of American Friends of San Diego.

Some 42 percent of those reporting abuse are US citizens, 40 percent are Mexicans, 9 percent are permanent legal residents, and the rest are citizens of Canada, Colombia, Guatemala, and Spain.

Sofia Sotres, one of the authors of the report, said that the fear of denunciation still persists because those who cross the border frequently fear reprisals by US authorities.

The report will be delivered to both the Customs and Border Protection authorities as well as to congressmen and other human rights organizations.

Among the recommendations that the activists ask are considered, they are equipping agents with cameras in their uniforms, as well as greater transparency and a mechanism of accountability, among others.