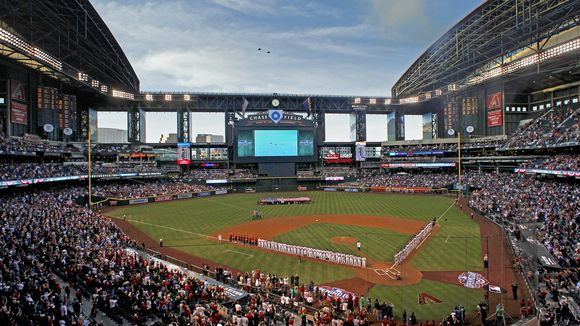 The Arizona Diamondbacks have filed suit against the Maricopa County Stadium District to get out out — or to alter — the terms of their lease for Chase Field. Specifically, they have asked for the removal of a clause in their lease which prevents the team from talking to outside stadium groups until 2024 and prevents them from leaving the ballpark until 2028.

The lawsuit is the latest chapter in an increasingly acrimonious dispute between the team and the county stadium authority. At issue: the team has claimed that the county must make $135 million in necessary capital improvements to the ballpark. The county maintains that the Diamondbacks are asking for mere cosmetic improvements to the park. Others have claimed that the Dbacks simply want to reduce the number of seats in the 48,500-seat stadium in order to increase ticket prices and revenue.

The Diamondbacks had attempted to get an outside investment group to cover the costs in exchange for development concessions. They have also told the county that they would handle the improvements in exchange for allowing the team to essentially take over the ability to host non-baseball events in the park. The development deal has fallen through and their offer to the city rebuffed. Last spring the team asked the county to let them out of the lease. That was sharply and colorfully refused by the county. Now the club is suing to do it.

Chase Field opened for business in 1998. Despite the Diamondbacks’ claims in the suit that the renovations are needed to ensure the safety of the facility, it seems far fetched that the ballpark is on the verge of being structurally unsound after 19 seasons of use (the club says it’s OK for 2017). That matter, of course, would be at issue if the lawsuit progresses and each side would present expert testimony on the matter.

What does not seem far fetched, however, is a club looking for a lucrative new ballpark — or seeking lucrative renovations on someone else’s dime — despite playing in a relatively new one. The Braves are doing that this spring as they move into Sun Trust Park after playing in Turner Field between 1997 and 2016. The Rangers likewise are building a new ballpark despite Globe Life Field coming online in 1994. In both cases, the reason for the move was/is clearly financial.

Are the Dbacks doing the same thing? That would seem to be a matter for the courts now.