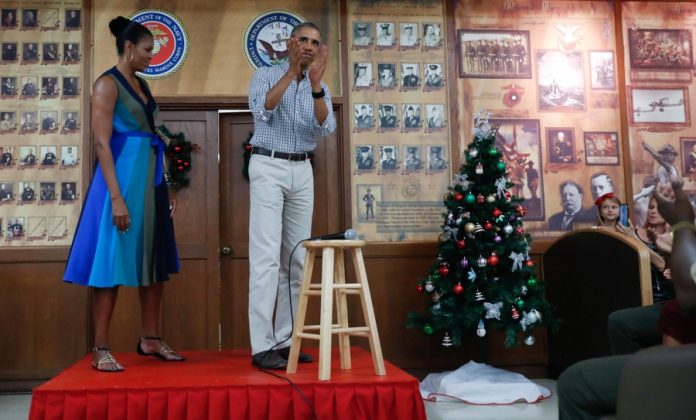 KANEOHE BAY, Hawaii (AP) — For eight years, Barack Obama has led a military fighting in multiple theaters overseas, becoming the only president in U.S. history to serve full two terms with the nation at war. On Sunday, he sought to pay tribute to the men and women who sacrificed along the way in battles that will continue even after his presidency comes to a close.

There was a tinge of nostalgia as Obama visited U.S. troops on Christmas for the last time, and some solemnity, too. The president, who spent Christmas Eve calling troops serving overseas, pointed out that as Americans celebrate the holidays, U.S. troops are serving in dangerous, remote places like Iraq and Afghanistan.

He said some were carrying out missions against the Islamic State group even on Christmas Day.

“As tough as it is to be deployed, the people here in America, back home, understand that every single day you serve, you’re fighting for our freedom,” the president said, with first lady Michelle Obama at his side.

Obama has made it a tradition to spend some time on Christmas at Marine Corps Base Hawaii, not far from the rented house that he and his family have made their winter home away from home. As Obama spoke, a few hundred troops sat around tables in uniforms, many with their families, in a mess hall hosting their Christmas meal.

“I just want all of you to know that it has been the privilege of my life to serve as your commander in chief,” Obama said.

He said even though he wouldn’t be addressing them again as president, he wanted to convey that as a private citizen, “my gratitude to you will remain.” He said his wife felt the same way.

“Our commitment to standing by you every step of the way — that won’t stop,” Obama said.

Obama ran for president eight years ago as an opponent of the war in Iraq, then inherited conflicts there and in Afghanistan. Though he declared the end of the U.S. combat missions in both countries and drastically ramped down U.S. involvement in those conflicts, some 8,400 troops remain in Afghanistan and 5,000 in Iraq.

He leaves office in January with the U.S. military also fighting in Yemen, Syria, Somalia and Libya. The brutal civil war in Syria shows no signs of ebbing.

Yet as he bid farewell to troops in Hawaii, Obama ended on a lighter note, pointing out that it might not be his final goodbye.

“I understand that I still have a little bit of rank as ex-president,” Obama said. “So I still get to use the gym on base and, of course, the golf course.”