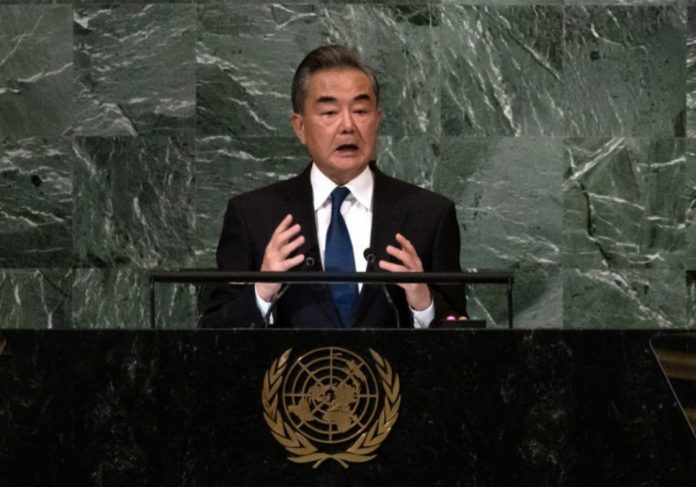 Chinese Foreign Minister Wang Yi warned on Saturday against any interference in Taiwan and told the UN that Beijing would take strong measures to prevent any outside support for the island’s independence.

“We must firmly combat Taiwan independence separatist activities and take the strongest steps to oppose outside interference,” the Chinese top diplomat said in his speech to the United Nations General Assembly.

Wang met with his American counterpart Antony Blinken on Friday and warned of Washington’s efforts to back Taiwan as Congress pushes through a bill to provide direct military aid to the island.

In his speech to the UN, where Taipei is not represented, the Chinese foreign minister took a hard line. “Any action to obstruct China’s reunification is bound to be crushed by the wheels of history,” he asserted.

Taiwan was part of China and the Chian Kai-sheck nationalists defeated by Mao Tse-Tung’s forces fled to Taiwan after the civil war in 1949.

But Taiwan, although it never formally declared independence, is self-administered, has a democratic system, and many Taiwanese do not see a connection to China.

President Joe Biden said a week ago that US forces would defend Taiwan from a Chinese invasion, although the White House made it clear that its China policy had not changed.

Washington severed formal diplomatic relations with Taiwan in 1979, when it went on to recognize Beijing as China’s sole representative.

But at the same time, he remained instrumental in supporting Taiwan.

A law passed by Congress obliges Washington to sell Taipei military supplies to guarantee its self-defense against Beijing’s forces.

Yet the United States maintains what is known as “strategic ambiguity,” designed both to prevent a Chinese invasion and to dissuade Taiwan from provoking Beijing by declaring independence.