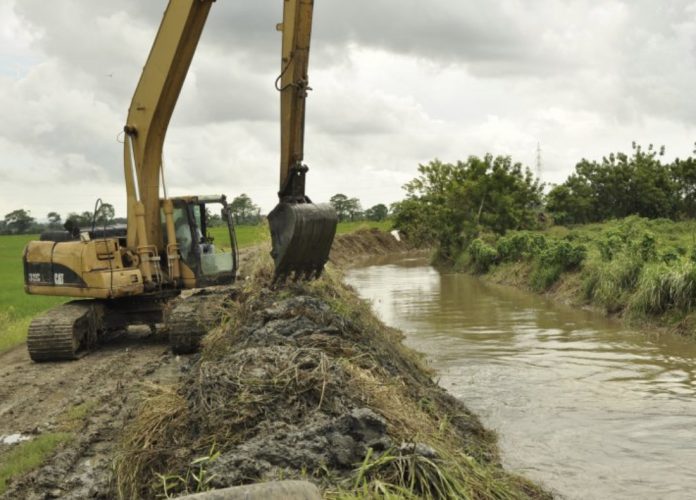 The National Institute of Hydraulic Resources (INDRHI) reported that it is carrying out maintenance work on the Camú canal, including cleaning the canal and its sediment intake and extraction work in its respective dam, located in the community of Jamo in this province. , actions that guarantee water in 65,000 cultivated rice fields and that constitute the livelihood of 800 producers and their families.

These works are part of the intensified cleaning and rehabilitation actions in canals and drainages of different irrigation systems, recently announced by the executive director of INDRHI, Olmedo Caba Romano, to ensure optimal irrigation, prevent floods that affect production, and , in any case, will achieve the rapid evacuation of water in the face of possible atmospheric phenomena.

The cleaning of the dam on the Camú River is carried out with a long-reach backhoe under actions coordinated by the Yuna-Camú regional directorate of INDRHI and the Camú River Irrigation Board. While the Camú channel, which passes through Las Cabuyas, Cenoví and other rice-growing communities, sediments have been extracted from a total of 23 kilometers to date and will be followed until its 30-kilometre length is completed.

Santos Paulino, president of the Camú River Irrigation Board, expressed his gratitude to the INDRHI authorities, especially its head Caba Romano, who, according to what he says, has shown all his commitment in improving irrigation and the take-off of the fields.

The prominent also organizes as an action for the benefit of such an important sector for the food and economic security of the country, the rehabilitation last quarter of the Jima Margen Derecha canal, which guarantees irrigation to rice producers in the Jima Abajo municipality, considered the capital of rice, which owns about 87,000 tasks cultivated by 795 producers.

It should be noted that simultaneously with the works on the Jima Margen Derecha and Camú canals, INDRHI is carrying out rehabilitation work on the Pantuflas canal along its 4.5 kilometers in length, located in the community of El Cercado in the municipality of Constanza, with the aim of guaranteeing greater quantity and quality of the flow that irrigates more than 4,500 productive tasks of a great variety of items.