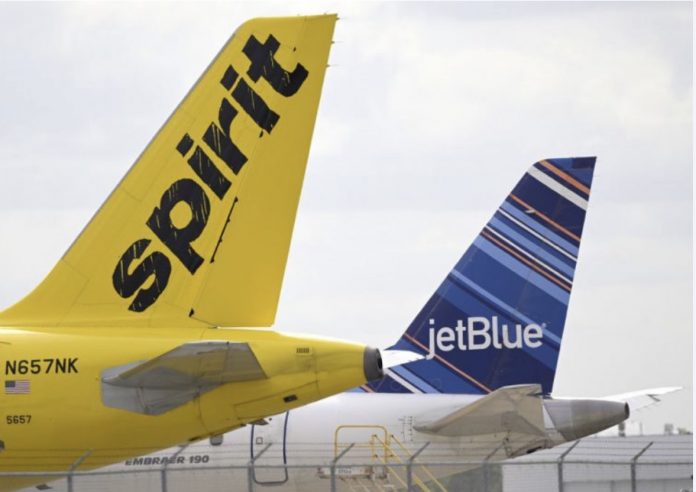 The US low-cost airline JetBlue reached an agreement on Thursday to acquire its competitor Spirit for 3.8 billion dollars.

The announcement of the purchase, which has yet to receive the green light from regulators and shareholders, comes a day after Frontier, another airline, abandoned a planned merger with Spirit.

If materialized, the new group will be abandoned as the fifth airline in the United States in number of seats offered behind the “Big Four” formed by American, United, Delta and Southwest.

It will have 77 million customers and will hold 9% of the US market share, according to figures provided by both companies.

“Spirit and JetBlue will continue to advance our shared goal of transforming the industry to lower fares for the Big Four airlines,” JetBlue CEO Robin Hayes said in a statement.

Spirit and Frontier had announced in February their intention to get closer.

But a few weeks later, JetBlue stepped in by making a better financial offer to Spirit shareholders.

Faced with rejection by Spirit’s board of directors, JetBlue launched a hostile takeover bid in May.

Spirit executives have repeatedly expressed their preference for a deal with Frontier, saying competition authorities would likely balk at a partnership with JetBlue. But they did not convince the shareholders.

An extraordinary general meeting to approve the merger with Frontier was postponed four times and the operation was finally cancelled.

In the deal announced Thursday, Jetblue is offering a cash payment for Spirit shares, a unit price of $33.50, 38% higher than the stock’s closing price on Wednesday.

Both companies expect to complete the transactions before the end of the first half of 2024.

Spirit shares rose a little more than 4% to $25.29 in electronic trading before the open on Wall Street on Thursday.