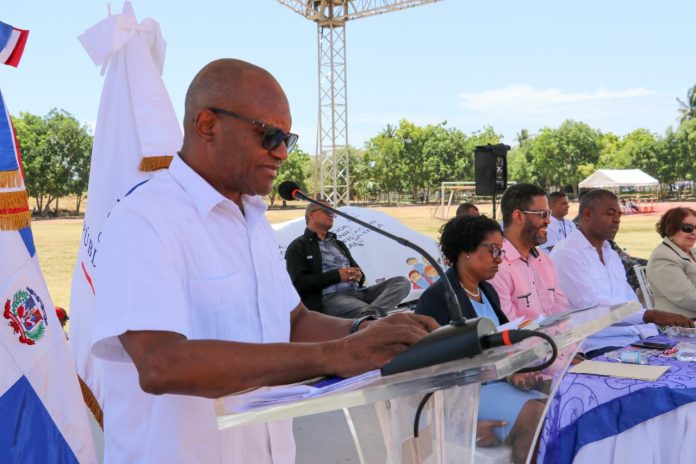 The executive director of the National Institute of Physical Education (INEFI), teacher Esteban Pérez Polanco, congratulated President Luis Abinader on Thursday, whom he considered as promoter of the INDÓMITA RD project.

After leading the official ceremony of the Grand Final of the “National School Athletics Tournament” in this province, Pérez Polanco said that honor must be paid to the president for having had the vision to promote the INDÓMITA RD initiative, a program that has among its objectives attract talents through school sports.

The director of INEFI also praised the work of the Ministers of Education, Roberto Fulcar; and Sports, Francisco Camacho, for having endorsed the development of this great talent recruitment program from school: INDÓMITA RD.

The welcoming words of the act were given by Diones Maribel González, governor of Barahona, while the words of exhortation were pronounced by Wanda Ferrer, director of the Regional 01 of Education in this province.

During the act, a testimony of Lidio Féliz, who appeared in the historic athletics track of the Villa Olímpica Sports Complex in Villa Central de Barahona, scene of the V National Sports Games of the year 1981, was presented on a giant screen.

The sports oath was in charge, precisely of Lidio Féliz, while the event was blessed by the Salesian priest Ricardo Jáquez.

The INEFI began this Thursday amid overflowing sports enthusiasm the Grand Final of the “National School Athletics Tournament”, within the framework of the INDÓMITA RD program.

The school sporting event takes place this Thursday, July 28 and tomorrow, Friday, July 29, at the athletics track of the Villa Olímpica Sports Complex in Villa Central.

With this athletics final of the INDÓMITA RD program, the institution culminates a successful day whose eliminatory rounds were held in different parts of the country.

This has been a year of tenacious work for the Directorate of INEFI, an institution that wants to provide quality school physical education and improve the comprehensive training of students.

This event has impacted one hundred and eleven thousand athletes since the qualifying rounds began in the 18 regional and 122 educational districts of the country.

The INEFI Directorate, headed by Professor Pérez Polanco, works with criteria to transform physical education, with the slogan “Education to live better”. The initiative is evidenced through the INDÓMITA RD program.

The qualifiers have covered all the regions of the educational map of the country such as the South, the Northwest Line, the Northeast, the East and the Metropolitan Region.
More about this source textSource text required for additional translation information
Send feedback
Side panels