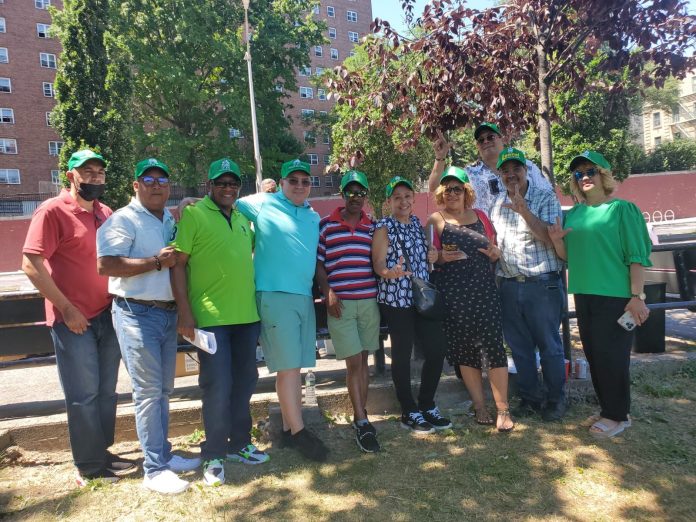 With great enthusiasm, the “Coordinator of the Bronx with Leonel” of Gustavo Rodríguez, carried out an Operation of New Affiliates to the People’s Force, under the direction of Mrs. Juana Lidia Perdomo de Rodríguez, at University Avenue and 174 Street, in the Bronx, New York.

Juana Lidia Perdomo said that the work of affiliating new members to the People’s Force Party is an action that is carried out constantly and that was left as a legacy of her husband Gustavo Rodríguez.

“For me it is a great satisfaction and an honor to be able to continue the political work that my husband, Gustavo Rodríguez (deceased), an outstanding disciple of Leonel Fernández, began for more than a decade in favor of his leader,” said Juana Lidia Perdomo. , who is leading the work for the development of the party here in NY.

She stressed that the hubbub can be seen on the faces of the members of the Coordinator, who with overflowing joy proceed to affiliate new members to that political organization, which will give victory to the next president of the Dominican Republic, Leonel Fernández.

She stressed that her husband, Gustavo Rodríguez, founder of the Coordinator of the Bronx with Leonel, if he were alive, was doing the work just like her, to attract new followers to the People’s Force.

She stated that, taking advantage of the July 4 weekend, they are registering all Dominicans who reside in this great city and who want to belong to the People’s Force.

Perdomo de Rodríguez said he was satisfied with the result of this great activity, since, despite being a long weekend, where a large part of the people take advantage and go on a trip with the family, the attendance was extraordinary, as well as the people’s reaction when they stopped to talk and seek information, among the slogans shouted by those present were “roars the Lion roars” “Leonel 24-28”. among other.

The affiliation work of new members continues with great energy and determination and today a large group of leaders presidents of middle managements, commanded by the lawyer Juana Lidia Perdomo de Rodríguez, showed off by affiliating people to Leonel Fernández’s party.

The Dominicans said they were present in the streets of the Bronx County, which has the supremacy in inhabitants of the Dominican Republic, residing abroad almost half a million of them live in this city.

Gustavo’s legacy is alive, because a number of leaders remained, who organized this concentrated effort, led by the widow, Juana Lidia Perdomo de Rodríguez, and Yberth Rodríguez, leaders of the Central Directorate.

Also, other members of the Central leadership of the party who were present at this activity were Luciano Vásquez and his wife Elizabeth Alcántara, Pascual Ramírez and wife, Gerardo Rosario and others.

He reported that part of the conversations that the participants had about the recent polls that have been coming out and others that they say they are aware of, but do not publish, they say that some have given a technical tie with Abinader while others are head to head. head.