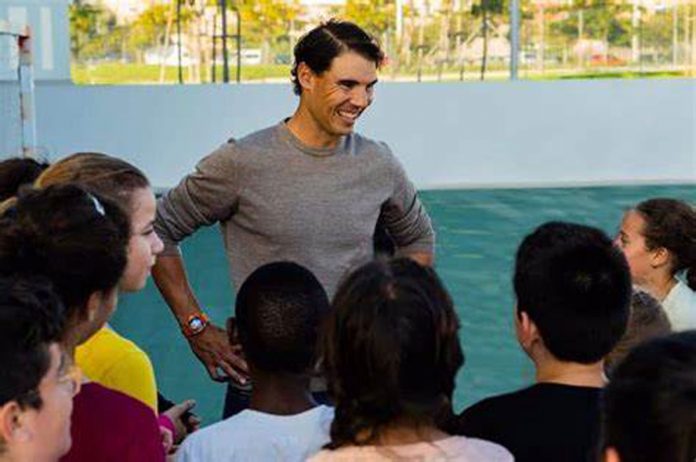 The Spanish tennis player Rafa Nadal headed this Wednesday the act of celebration of the 10 years of the Foundation that bears his name, in which they detailed the projects in progress and the “social impact” achieved in the most needy, with the “long-term commitment term”.

“We celebrate 10 years, although it is a little longer. We decided to start with the Foundation 11 years ago. The reason is always to try to help, to give a little back to society for all the luck we have and how well life has treated us”, Nadal himself said.

The coronavirus pandemic prevented this event last year, but the visible head of the Rafa Nadal Foundation finally gathered at the Pérez – Llorca Auditorium in Madrid to celebrate that round figure. Nadal, founding patron, took the floor to recall the beginnings with the conviction that sport and education are transformative tools to achieve a better world.

“I started very young in the world of sports, I was lucky to stand out when I was 15 years old. At that time I tried to join events, collaborations that were intended to raise funds for different organizations. After a few years, at home I had always had the An example of my mother, I always saw her help different organizations, “said the 20 ‘Grand Slams’ champion.

“We decided to take a step forward and create the Foundation little by little. The objective was to allocate efforts to the projects that motivated us, 10 years later we can say that the objective of these first 10 years is fulfilled,” added the Balearic, who in sports are physically recovered for the next academic year, before giving way to the project manager of the Rafa Nadal Foundation.

Eunate Gómez spoke about the four projects run by the Foundation: Nadal Educational Tennis School, Más Que Tenis, Study & Pla and the Rafa Nadal Foundation Centers, with more than 7,000 beneficiaries. “There is one important thing, not to take steps back, we have a great responsibility, to help more and more families,” recalled Nadal, who also valued the importance of sport.

In fact, the memory of these 10 years of the Foundation was entitled “the transforming power of sport”. “We believe that both education and sport are decisive tools in the training of young people. Sport has a unique thing, when you are practicing sport it does not matter where you come from and who you are, you are one in front of the other, competing or forming teams, It does not matter which house you are from, it is something very powerful, “said the tennis player.

“Through sport values ​​are learned that are very important, of great help for the formation of these young people,” he added. In addition, María Francisca Perelló, director of the Rafa Nadal Foundation, highlighted the work of the entire work team and insisted on the “quality” and “long-term” commitment.

“We think about continuing to develop the projects, we are demanding, the desire is to continue growing, to take our programs to more places,” said Perelló, who unveiled a new agreement with UNESCO and recalled that Madrid, in the Usera neighborhood, will host a new center of the Foundation, after those of Mallorca and Valencia. “Much remains to be done, our commitment is long-term, we will continue working with the hope of creating that social impact that we have seen in recent years,” she said.

Finally, Nadal recognized the emotion that India produced and the reason for starting her projects there, with the responsibility also of returning to Spain. “Seeing people who have such a bad time but have the ability to be happy, it was shocking, when I came back from India I have that memory and we started there. Then, in 2008 with the crisis, it was time to go home. First we have to consolidate everything we have, there is a lot to do, “he concluded.