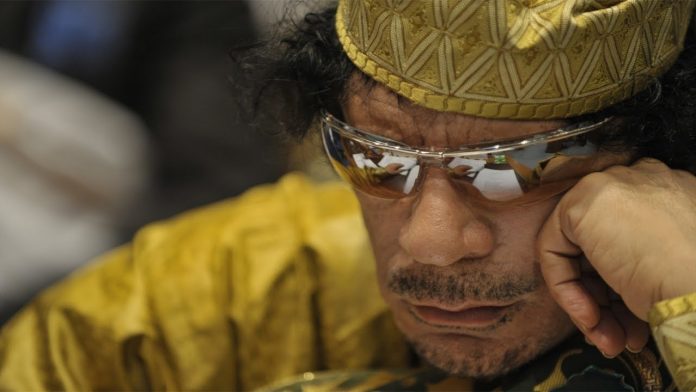 Libya marks ten years this Wednesday since the capture and execution of the country’s then leader, Muammar Gaddafi, after months of fighting triggered by the repression of pro-democracy protests amid a fragile peace process and attempts to reunify the institutions of the African country .

Gaddafi ruled the country with an iron fist from September 1969 until his death when he was captured by rebels in a drain near the city of Sirte, where he had hidden after a series of bombings carried out in support of the rebels after NATO imposed a no-fly zone as part of the war.

The videos about the capture of Gaddafi and the subsequent photographs of his corpse surrounded by people celebrating his death opened the door to a transition process that has been marked for all these years by instability and even open conflict, in a context of atomization of power and domination by various militias.

The ‘brother leader’ and ‘guide of the revolution’ led a coup against the monarchy in 1969 and quickly imposed a political system – the Yamahiriya – based on the repression of the opposition and the virtual non-existence of state agencies. , replaced by networks of loyalties co-opted through the enormous economic resources derived from oil exploitation.

This situation of dispersion and the absence of true figures and nuclei of power translated into a complex political and security context for the transitional authorities that emerged after its fall, marked by internal disputes and the fracture around regional lines.

Thus, the country was quickly ‘separated’ into the three historical regions of the country – Tripolitania, Cyrenaica and Fezan – with the main power centers around the capital, Tripoli, and the cities of Benghazi and Tobruk, in the East of the country, an area especially aggrieved by the exploitation of resources and the poor distribution of profits.

Although the country proceeded to hold historic legislative elections in 2012, repeated internal disputes led to other elections in 2014 that eventually led to the division of the country between two administrations that had the support of different militias – some of them accused of serious crimes – to support their positions.

The germ of this conflict was the decision of the Supreme Court to invalidate the vote and the subsequent measure of the elected Parliament to move to Tobruk, at a time when it still had international support. In 2015 an agreement was signed in the Moroccan city of Skhirat to try to unify the administrations, a process from which a unity government would emerge.

This Executive, headed by Fayez Serraj as prime minister, was transferred to Tripoli amid complaints about its lack of representation because it derived from a political agreement and not a vote, despite which the international community decided to convey its support.

On the contrary, the differences over its application remained in force and resulted in a freeze in the application of the clauses of the agreement that led the Tobruk authorities to withdraw their recognition and later to an armed conflict in the face of the offensive led in 2019 by Khalifa Haftar against Tripoli.

INTERNATIONAL INTERVENTION
This offensive meant the deepening of another facet of the institutional and security crisis that Libya has been going through since the death of Gaddafi: the participation of different countries in support of various groups to materialize their foreign policy objectives with the country as the scene of these disputes.

In this context, Libya’s drift towards the war of ‘proxies’ began in 2014, when General Khalifa Haftar, an ally of the eastern authorities, launched ‘Operation Dignity’ against Islamist militias in the cities of Benghazi and Derna, between the which highlighted the Shura Council of Benghazi Revolutionaries, led by Ansar al Sharia, emerged in 2011 in the context of the war and linked to Al Qaeda.

During the meeting, Haftar had the support of France, the United Arab Emirates (UAE), Egypt, Jordan and Saudi Arabia, which helped him achieve international legitimacy and present himself as an asset in the fight against terrorism. Subsequently, the Islamist and Salafi coalition of militias ‘Dawn of Libya’ launched operations in Tripolitania against Haftar’s positions, in this case with the support of Turkey, Sudan and Qatar.

In this breeding ground, Haftar decided in 2019 to launch an offensive against Tripoli with the support of the UAE, Egypt and mercenaries sent by the Wagner Group – owned by a businessman close to the President of Russia, Vladimir Putin – while Turkey intervened in decisively in support of the Government of Serraj.

The conflict, denounced on numerous occasions by the United Nations for its internationalization and the use of mercenaries by the actors in the conflict – including militiamen from Sudan, Chad and other countries in the region – finally ended in 2020, when Unity Government forces repelled the attacks and forced Haftar to retreat.

At that time, a process of contacts was opened between the opposing parties that has led to a ceasefire agreement in October 2020 – which is being maintained in practice – and the formation of a new unity government that emerged from the Forum of Libyan Political Dialogue (LPDF), headed by Abdul Hamid Dbeibé.

TENSIONS OVER ELECTIONS
Despite the fact that this new Executive, which sought to achieve the unification of administrations for the first time since 2011, got off to a good start and without internal disputes being transferred to external tensions, the last few weeks have been the scene of a decision-making process that has made fear of its collapse.

This Government has among its main tasks the holding of parliamentary and presidential elections on December 24, a date agreed to coincide with the 60th anniversary of the country’s independence, and agreeing on the necessary legislation to carry them out.

However, the differences between the House of Representatives – the Parliament based in the east of the country – and the High Council of State rebounded after this first body approved a motion of no confidence against Dbeibé, rejected by the prime minister and the international community, which called for compliance with the agreements.

Likewise, the growing tensions prevented reaching an agreement on the electoral law, which led the House of Representatives, chaired by Aguila Salé –a political figure close to Haftar–, to approve its version of it unilaterally and bet later by a postponement of the parliamentarians.

This law has caused controversy in the country, since it authorizes people like Haftar to stand in the elections, something ruled out in the political agreement and the Constitutional Document, in case they leave their military positions before the vote – something that the general has already done -, being able to rejoin the same in case of defeat at the polls.

Ten years later, among the main names being considered as candidates for the Presidency is Gaddafi’s son, Saif al Islam, sentenced to death in July 2015 after being tried in absentia while in the custody of a Zintan militia and wanted for the International Criminal Court (ICC).

Saif al Islam, released after an amnesty granted by the eastern authorities in 2016, is also the subject of an arrest warrant from the Libyan Prosecutor’s Office for his alleged relationship with Russian mercenaries who participated in the offensive of Haftar, another candidate for the polls. .