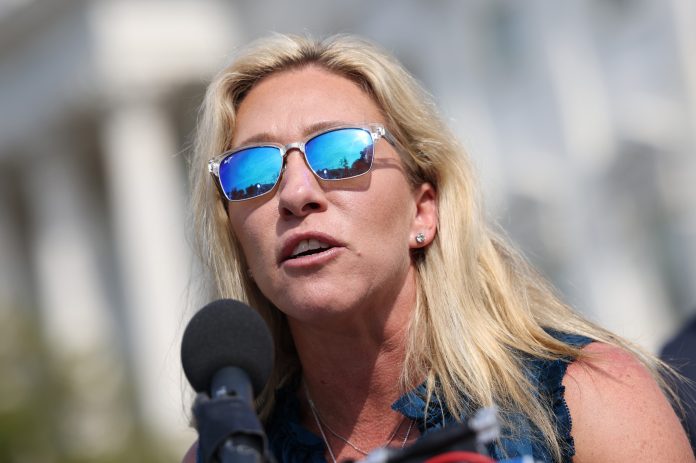 The social network Twitter has suspended the account of Republican congresswoman Marjorie Taylor Greene for a week for spreading comments about the coronavirus pandemic that have been considered “misleading” by the company.

Greene said Monday that the Food and Drug Administration (DFA) “should not approve vaccines against COVID-19” and stressed that they are “failing” and are ineffective at containing the spread of the virus, ” just like masks. “

After that, a company spokesperson has detailed that the tweet has been designated as “misleading information about COVID-19” and added that “the account will be in read-only mode for a week due to repeated violations of the regulations. of Twitter “, according to the American television network CNN.

Greene has highlighted after Twitter’s decision that the social network has made this decision against her “for telling the truth and tweeting what many people say.” “I have vaccinated relatives who are sick with COVID-19. Studies show that vaccinated people still get and spread COVID-19,” she argued.

“In my opinion, the FDA should not approve these vaccines until there is more research,” she said. “If Marjorie Taylor Greene dares to speak the truth, Twitter suspends me because the truth is offensive to the fragile hypocrites on Twitter. I refuse to be silenced on these vital issues and the Chinese biological weapon that COVID-19 supposes,” she has added.

In this sense, he has criticized that “they allow pornography to be published on Twitter” and that “messages are published about parents (…) changing the gender of their children on Twitter”, but “Twitter does not allow a real discussion about the truth by an elected congresswoman because she is only interested in the communist agenda of the Democrats for the United States. “

“Why is (the main person in charge of the fight against the coronavirus in the United States, Anthony) Fauci harshly criticizes the cyclists outdoors without a mask but is silent about the sophisticated birthday party of (former President Barack) Obama at an event super contagion for Hollywood elites and Democrats? “he asked.

“Why is it okay and moral to allow tens of thousands of COVID-19 positive migrants to enter our country and be shipped to all states with taxpayer money while forcing our children to wear masks to go to the school? “, He has questioned, as reported by the newspaper ‘The Washington Examiner’.

Greene, who in the past has compared the obligation to wear a mask in the Capitol with the Holocaust, has already suffered two other previous temporary suspensions on the social network for her controversial statements and is exposed to a closure of the account on Twitter .

The congresswoman has already suffered a similar suspension this year after posting messages about an alleged manipulation of the results in the Senate elections in Georgia, which has added to various conspiracy theories about the pandemic.

Likewise, last week she suggested that the southern states of the United States receive the “friends of the police state” of the president, Joe Biden, with their firearms if they show up at their homes to see if they have been vaccinated.

Greene, one of the strongest defenders of the conspiracy theories of former President Donald Trump, was reprimanded a few months ago by the Republican leader in the Senate, Mitch McConnell, who said that his “crazy lies” are “a cancer” for him. party and the North American country.