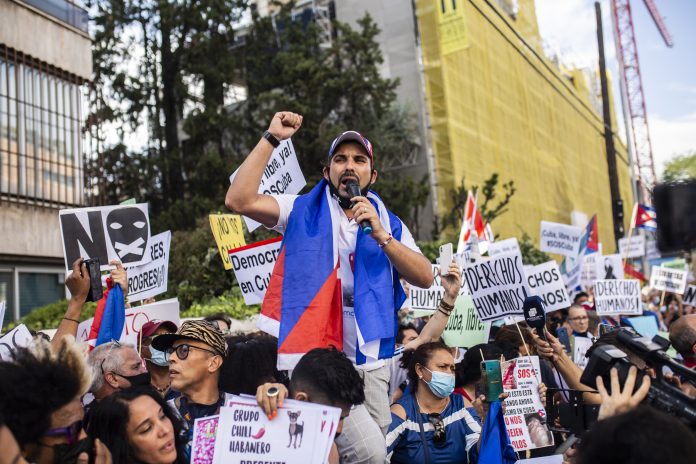 The Government of Cuba has announced this Wednesday the authorization of exceptional travelers to import food, cleaning products and medicines without limits or payment of tariffs until December 31, 2021.

In a meeting of the government group in which the President, Miguel Díaz-Canel, the Prime Minister, Manuel Marrero, the Minister of Economy, Alejandro Gil, and the Minister of Energy and Mines, Liván Arronte, have participated, this measure has been announced and others of social and economic significance after the outbreak of protests in recent days.

Díaz-Canel has made reference to the detainees in the demonstrations to refer that “these people will receive the application of the laws in their fair measure and without abuse.” In this sense, he has assured that “it will be necessary to apologize to those who, in the midst of the confusion, were unfairly mistreated.”

“It is legitimate that an important part of the people and the forces of internal order countered these events,” he pointed out, and he justified it because otherwise “violence would have prevailed and would continue.” So far there are no official numbers of detainees in the demonstrations, except that the Government confirmed the death of a person in the framework of these.

Also, the president has mentioned “that blockade” that “delays and does not allow Cuba to advance at the speed we need” and has reiterated as the reason for the “disagreements” that have been reflected in the protests.

According to Marrero, he wants to show that “this government is alive” and “is looking for solutions to the people,” according to the official press.

Other measures announced by the group has been the review of power plants in the country with which it is expected to “considerably improve the generation capacity” and “which will allow reducing the effects,” explained Marrero.

Likewise, he has defended that the vaccination process against COVID-19 will be accelerated after registering 51 deaths due to the disease this Wednesday, a figure that is the highest number of deaths since the beginning of the pandemic and that is part of the increase in the incidence that the country has been registering for several weeks.

“We maintain the Government’s policy of not affecting the population, and we remained so throughout the pandemic, until it was not possible because the demand was greater than our capacity to generate vaccines,” he said, as well as announced that he hopes that the entire population is vaccinated by the end of the year.

On the other hand, the Minister of Economy, Alejandro Gil, explained that “a consensus has been reached to eliminate the obligations to use the salary scale in the state company” with which companies can “manage their salary fund.”

Cuban citizens have taken to the streets in recent days to express their discontent over the shortage of basic products, such as food and medicine, and members of the international community and NGOs, among others, have denounced a harsh repression against the protesters. The Cuban government considered Tuesday that it has seen “worse scenes” of repression and police violence in Europe and has denied a “social outbreak.”

The Cuban opposition organization Prisoners Defenders reported this Wednesday that it had submitted a complaint to the United Nations that includes a “partial” list of 162 “potential forced disappearances”, within the framework of the mobilizations.