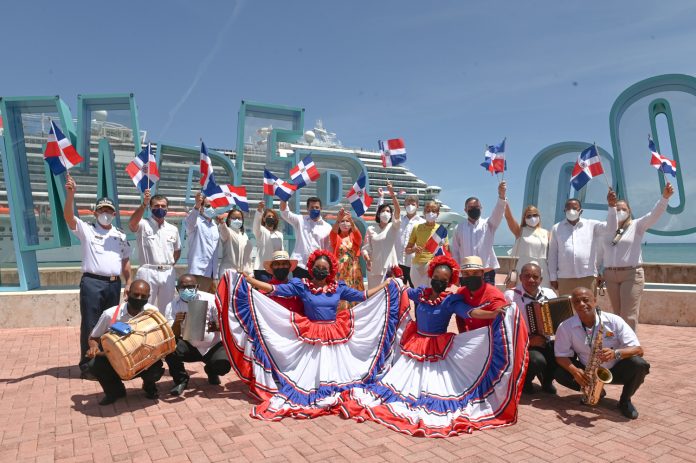 The First Lady of the Republic and Minister David Collado lead the arrival of the first tourist cruise since the suspension of operations due to a pandemic.

Puerto Amber Cove, Puerto Plata.- With hope and great joy, the people of Puerto Plata receive the arrival of the exclusive Carnival Horizon cruise through this terminal, which comes to resume the activities of this segment, bringing new impetus to the growth of the country’s tourism industry.

The restart of these operations was led by the First Lady of the Republic, Raquel Arbaje, the Minister of Tourism, David Collado, in the presence of the senator for Puerto Plata, Ginette Bournigal, Cristine Duffy, president of Carnival Cruise Lines, senior executives of the Port Amber Cove, businessmen and local authorities.

This arrival of the Carnival ship with 2,600 passengers and about a thousand crew members, was received with great joy and enthusiasm by the people of Puerto Plata, especially by taxi drivers, tour guides, tour operators, artisans and other servers in the value chain of the tourism sector of this province.

Regarding this important event for the recovery of tourism in the country, with a face of satisfaction, the Minister of Tourism, David Collado, affirmed that with the arrival of this ship on the North coast, the Dominican Republic is filled with hope, providing more jobs, changing the faces of thousands of families and reactivating hundreds of small businesses.

“There are already 120 thousand jobs that we have been able to recover,” Collado said after noting that June has been the best month of growth in the sector since the appearance of Covid 19, with 468,329 foreign tourists arriving with a 20% increase compared to May.

He also highlighted the effectiveness of vaccination and the biosafety protocols implemented in the hotel sector and in the country’s tourist centers, recognized by various organizations, including the World Tourism Organization -WTO-

Collado highlighted in this regard that 95 percent of the passengers who arrived on the Carnival cruise and their crew are fully immunized against Covid.

The First Lady, Raquel Arbaje, highlighted the great effort made by the Government, President Luis Abinader together with Minister David Collado and the alliance with the private sector, having changed the faces of the Dominicans with the greatest contribution of jobs and achieving the recovery of the economy.

Christine Duffy, president of Carnival Cruise Line, expressed her satisfaction with the commissioning of the Amber Cove Port cruises, while she announced that this month the Mardigrass cruise ship will arrive at La Novia de Atlántico and La Romana. .

At the ceremony, which was blessed by the Bishop of Puerto Plata Julio César Amaro, held at the Coco Cana Lounge restaurant, the minister David Collado, the first lady Arbaje, the captain of the ship Claudio Cupisti and the president of the Carnival Cristine Duffy.