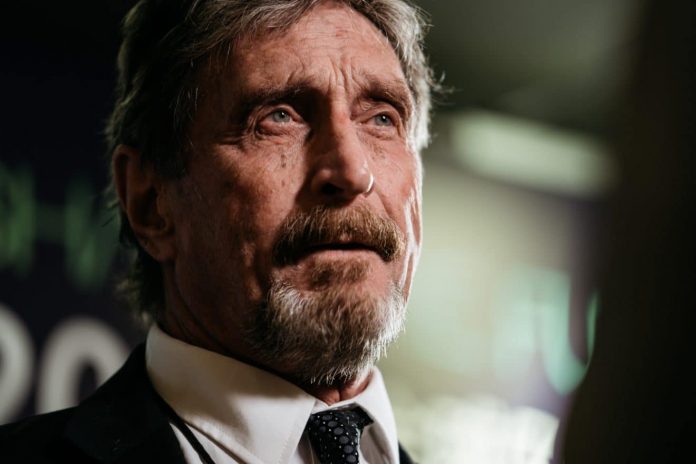 The creator of one of the main antivirus programs was awaiting extradition to the United States.

John David McAfee, creator of one of the main computer antivirus programs and pending extradition to the United States for an alleged tax offense, has been found dead this Wednesday afternoon in the cell he occupied in module 1 of the Brians 2 Penitentiary in Sant Esteve Sesrovires (Barcelona), where he was admitted, prison sources have explained to Europa Press.

The inmate was 75 years old and had entered prison on October 4 of last year, by order of the National Court.

The surveillance professionals and the prison medical services have intervened immediately to practice resuscitation maneuvers but finally the doctors have certified the death, has informed the Ministry of Justice of the Generalitat.

The judicial delegation has traveled to the penitentiary center and investigates the causes of death, although, according to the Generalitat, “everything indicates that it could be a death by suicide.”

EXTRADITION
The court of the National High Court that agreed this past Monday to extradite the billionaire to the United States for a tax offense indicated in its car that the defense argument that he was being politically persecuted for his militancy contrary to the established system of fiat money – the dollar – It is not argued and points out that their personal motivations “are not legally relevant.”

“There is no supporting evidence that such a thing – political persecution – could be happening, on the contrary, the claim made has protection in a crime against public finances – tax evasion – and the internal motivations of the subject to observe a elusive or rebellious conduct in compliance with tax obligations is not legally relevant “, indicates the Second Section of the Criminal Chamber of the National High Court.

In this sense, the order indicates that beyond the verbal allegations that McAfee made, he has not provided data or revealing indication that he was a politically persecuted person. And the Chamber adds that his participation in the primaries of a radical and very minority political party where he was not even elected as a candidate, does not present an obvious link with the present extraditional claim.

Thus, they argue that he has not credited political activism or of any kind that has been repressed, “on the contrary, according to his own allegations, he would have participated in the primaries of a particular party to defend his convictions with an unfavorable result for him.”

And they add that it has not provided data that this activism puts at risk or poses any kind of danger to the interests of the complaining authorities, being rather “subjective convictions and allegedly exculpatory justifications without a real basis accredited in the file, still in a minimal circumstantial way “.

In line, the court recalls that his social, economic or any other relevance “does not grant him any immunity” and therefore he is subject to the laws in the same way as any “irrelevant” citizen. “The principle of equality before the law is inexorable,” they added.

On the other hand, on the argument that extradition should be rejected on humanitarian grounds, since the sentence due to his age and state of health would entail life imprisonment, the Chamber explains that there is no record that the defendant suffers from serious health problems and there is no evidence that he has suffered any problem related to covid-19.

THE DETENTION IN THE PRAT
The decision of the Chamber has taken place after the hearing was held on June 15, after the arrest of the magnate last October at the El Prat airport (Barcelona). In it, McAfee claimed to be a US politician persecuted for his complaints against the “corruption” of the tax agency of that country. “If I am extradited, it is almost certain that I will spend the rest of my life in prison because the United States wants to use me as an example,” he said.

In its report prior to the hearing, the Public Ministry considered that his extradition was appropriate but only for the tax crimes related to the 2016, 2017 and 2018 fiscal years. But the United States requested his extradition for not having presented the relevant income statement in that country in five years, from 2014 to 2018.

Depending on the basis of the extradition request, all Americans are required to file an income tax return if the minimum income exceeds approximately $ 22,000 per year – a figure that varies slightly depending on the year. And they allege that McAfee in those years resided in Lexington (Tennesee) and that he concealed his income from the treasury “pretending that he lacked them.”

“He has repeatedly declared to be aware of his obligation and has boasted of his decision to refuse to pay taxes,” they explained, to later detail that in 2014 he had income from talks and events worth $ 90,000 and not only did he not do the statement, but his earnings were transferred to a third person so as not to appear as a beneficiary and bought a property that he also put in the name of another person.

TALKS AND CRYPTOCURRENCIES
In 2015 he made a profit of $ 100,000 for talks and the transfer of rights to tell his life story; In 2016 he obtained $ 800,000 – most of it for consulting MGT Capital Investments – which was paid to him by making transfers to third parties.

In 2017 the amount he obtained was 1.25 million dollars, and a large part of it was received in cryptocurrencies. As he understood that this digital currency could not be tracked by the treasury because the payment was not nominal, he had that amount credited to an Ethereum wallet through ten transfers and then moved it to other wallets.

But the jump in revenue comes in 2018 when McAfee receives $ 8 million for consulting and promoting various initial cryptocurrency offerings (up to five different ones). That income came to him in cryptocurrencies that he later transformed into dollars. Part of the amounts were transferred to companies controlled by him and he spent them on buying real estate and a yacht that he put in the name of his wife.

ONLY FOR THREE YEARS
In the legal qualification, the Prosecutor’s Office recalled that the United States is pursuing him for five serious crimes of tax evasion that carry a prison sentence of no more than five years per exercise, and another five minor crimes for failure to present the declaration.

But the prosecutor explains that in Spain, not filing the declaration is not a crime but an administrative offense, and he points out that if it had criminal significance, he would only have it within the fiscal offense. And he deepens that with respect to 2014 and 2015 there is no tax offense since in Spain the tax quota defrauded is far from the 120,000 euros required.

For this reason, they pointed out that only the facts relating to the years 2016, 2017 and 2018 are constitutive of three tax crimes. And they recalled that the extradition treaties establish that the offense must be punishable by more than one year in prison, therefore that the punitive minimum required by law is met.