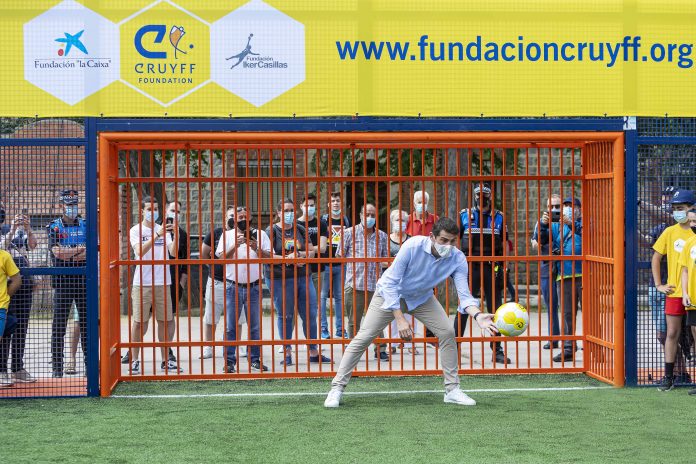 “As a child, in the pachangas we had fun and values ​​such as friendship, respect or illusion were promoted”

The former Spanish international soccer player Iker Casillas inaugurated the Cruyff Court Fundación Iker Casillas this Friday in Ávila, acting as godfather of this court that is part of the Cruyff Foundation project, with the aim of promoting values ​​in boys and girls through football and of sport.

Casillas, president of the Iker Casillas Foundation and godfather of the Cruyff Court in Ávila, explained the positive things of having a soccer field for the little ones where they can learn key values ​​for their personal future.

“When I was a child, the neighborhood soccer fields were a meeting point where, through sports, throwing our pachangas we had fun, without realizing that values ​​such as friendship, respect or inclusion were promoted,” he explained the exporter.

Now, thanks to his Iker Casillas Foundation and the Cruyff Foundation, also with the presence of the la Caixa Foundation, Casillas intends to recover that idea with the inauguration of this open facility. “So take care of it and enjoy it. I’m proud because it is in Avila and you all know what I want in this land,” he said.

“For the Cruyff Foundation it is an honor that athletes like Iker Casillas join our cause and help us to give visibility to a community project in which we use sport for girls, boys and young people as a tool for social integration,” said the Director of the Cruyff Foundation, Pati Roura.

The one in Ávila is the seventh of the 13 Cruyff Courts that are planned to be created in different provinces of Spain thanks to the joint work between the Cruyff Foundation and the “la Caixa” Foundation. In 2016 the first of the fields was inaugurated in Palencia, with Eusebio Sacristán, former FC Barcelona player and member of the Dream Team trained by Johan Cruyff, as sponsor.

This was followed, in 2017, by Cruyff Court Joaquín Sánchez, captain of Real Betis Balompié, in El Puerto de Santa María. Later, in 2018, the Cruyff Court Juan Carlos, also a former FC Barcelona player and member of the Dream Team, was inaugurated in León.

“This field will become a new meeting point for many children and young people in the neighborhood, where they can play and share experiences and values ​​such as companionship and teamwork with their neighbors. For the” la Caixa “Foundation it is gratifying to be able to contribute to make this possible “, added Xavier Bertolín, corporate director of Education and Marketing of the” la Caixa “Foundation.

For his part, the mayor of Ávila, Jesús Manuel Sánchez Cabrera, after encouraging children and young people to practice sports outdoors, thanked the promoters of this initiative for their commitment to the capital of Avila in a project that transcends sports and that will allow promote the values ​​of sport, joint work or integration.