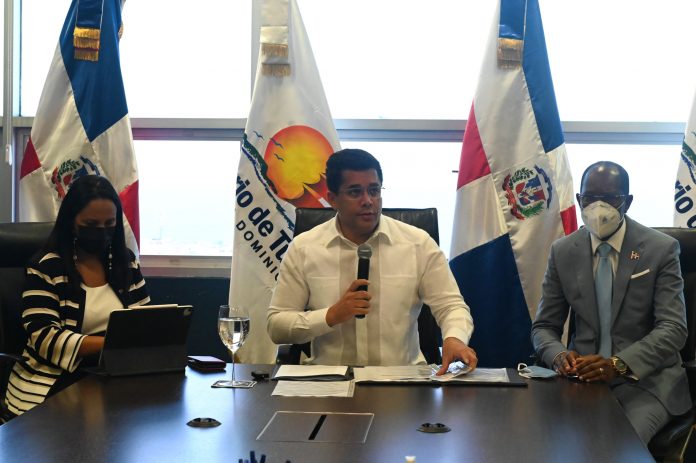 Tourism Ministers of the region and Secretary General of the UNWTO, Zurab Pololikashvili will analyze protocols and recovery of the industry worldwide after the effects of the pandemic

SANTO DOMINGO.- With the presence of the President of the Republic, Luis Abinader, 16 Ministers of Tourism of the Americas and 4 Vice Ministers, they will analyze the situation of tourism worldwide at the “Tourism Meeting of the Americas”, to be held this Friday in Punta Cana.

The event, organized by the World Tourism Organization (UNWTO), will begin with speeches by the President of the Republic, Luis Abinader and the Secretary General of the UNWTO, Zurab Pololikashvili, and will have representatives from Mexico, Brazil, Panama, Venezuela, Argentina, Colombia, Chile, Peru, Honduras, as well as Guatemala, El Salvador, Nicaragua, Puerto Rico, Cuba, Haiti, Bolivia and Barbados.

At a press conference to announce the agenda and details of the event, the Minister of Tourism, David Collado, explained that about 10 tourism ministers will participate in person, and another six will do so virtually.

Collado affirmed that “with this meeting, we continue to show leadership in the tourism sector in the region, in which the UNWTO chose the Dominican Republic for the good result of the development of the pandemic in the country, which they have congratulated in a public way ”.

He expressed optimism that the meeting will serve to build a common vision among all stakeholders.

The official also stated that the first item on the agenda will be on “The Perspectives of the Member States prepared to restart tourism.”

The Vice Ministers of Tourism Carlos Peguero, of International and Technical Cooperation, Jacqueline Mora, offered details on the signing of the Agreement of Understanding to be signed by the ministers of the region, in which they will reconfirm what is the alignment of the protocols worldwide, and that these “have a similar guideline in all UNWTO member countries.”

According to the official agenda, the opening act of the meeting will be at 9:30 in the morning this Friday, at the Hyatt hotel, while, for 4:30 in the afternoon as a closing activity, the Declaration of Punta Cana, Dominican Republic.