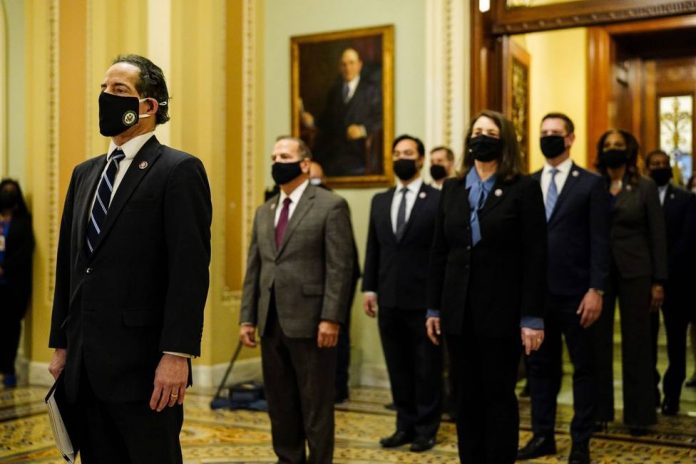 The United States Senate has approved this Tuesday to go ahead with the impeachment trial against former President Donald Trump, thus knocking down the unconstitutionality appeal presented by his lawyers to prevent the tycoon from responding to the accusations of “incitement to rebellion” for the assault to the Capitol on January 6.

The vote, which had in addition to the 50 favorable votes of the Democrats with six other Republicans, took place after a video of about 13 minutes was broadcast in the full Senate in which images of the mob attacking the Capitol with Trump’s previous slogans at a rally outside the White House that same day.

In this regard, the representative of the Chamber of Deputies Jamie Raskin, the main manager of the impeachment trial of the Democrats, has assured in his initial comments that the ‘impeachment’ is “based on facts” and that they would not hear “extended sermons” from his Part, after what has happened to reproduce the video, from which, according to the US press, some senators have had to look away from the harshness of the images.

The tape released shows how former President Trump encourages his supporters to “walk to the Capitol” to “stop the robbery” and to tell the congressmen who were counting the electoral votes, which certified the victory of Joe Biden in the presidential elections, that “they will never recover the country with weakness.”

The images showed some of the most tense moments of the day on January 6, with Trump supporters smashing windows, stalking Capitol Police officers and even some of the senators still in the House.

The mob stormed the Legislative headquarters shouting “Pence Traitor”, in reference to then Vice President Mike Pence, who presided over the electoral vote count, and “Without Trump there is no peace.” The Democrats’ video concluded with Trump’s deleted tweet on January 6, saying that “these are the things and events that happen when a sacred and landslide election victory is so brutally and unceremoniously removed.”

The images of Trump declaring his love to his unconditional while they attacked the headquarters of the Legislative Power in Washington have been part of the audiovisual montage that the senators have been able to see before the vote and the allegations of the former president’s lawyers, which have been extended for an hour.

FIRST AMENDMENT AND “INSACIABLE THIRST” OF ‘IMPEACHMENT’
One of the defense attorneys, Bruce Castor, has appealed to the First Amendment of the United States Constitution to justify the words expressed by Trump both on January 6 and the days before, in which he was in charge of feeding the unfounded theories on electoral fraud.

Although Castor condemned the actions of the mob, he defended that Trump should not be held responsible for the actions of his supporters, since his right to freedom of expression is registered in US law, reports NBC.

Castor was the first of Trump’s lawyers to speak, although his other lawyer, David Schoen, was scheduled to do so first. This change in plans, sources familiar with the matter have confirmed to CNN, has been due to the fact that the presentation by the Democratic managers “was well done.”

Castor has also stressed that holding this impeachment would open “the floodgates” for future impeachment, since “we cannot suggest punishing people for political speeches in this country. If people commit illegal acts of their beliefs and cross the line, they should be locked up. “

Schoen, for his part, has insisted that it is an unconstitutional process in which, he said, the “clear” intentions of the Democratic Party are evidenced to prevent his client from being able to present himself again to the next presidential elections in 2024.

Trump’s defense has also turned to audiovisual resources, and Schoen has shown a video in which he shows a group of Democrats in Congress demanding impeachment of Trump since 2017 and throughout the years, after claiming that ” Democrats have an insatiable thirst for ‘impeachemnt.’

However, the other managers of the Democratic prosecution in the trial, Joe Neguse of Colorado and David Cicilline of Rhode Island, have analyzed after the broadcast of the video the history of the impeachment and how it was written in the Constitution, argui0ng that there was sufficient precedent to celebrate an ‘impeachment’ against Trump.

Likewise, Democrats have accused Trump’s defense of trying to create a “January exception,” which would create a loophole for presidents to commit crimes in January, before leaving office, without being prosecuted for them.

“Presidents cannot ignite the insurrection in their last weeks and then walk away like nothing,” Neguse emphasized.

Specifically, he has disagreed with Castor’s presentation, especially when he has called the presentation of the Democrats’ arguments “well done.”

However, one of these sources has assured that, since the ex-president’s legal team was formed a little over a week ago, the presentation before the Senate of his lawyers went as expected and his team continues to think that it will achieve absolution.

Trump would be staying out of the public eye until the impeachment ends, although he would already be discussing ways to reappear to help the Republican Party in the House of Representatives midterm elections.

THE POLITICAL TRIAL CONTINUES
Despite the six Republicans who have voted in favor of the constitutionality of the impeachment, the figure of 67 senators that the Democrats need to, in effect, condemn former President Trump is still a long way off, since there should be 17 Republicans who will vote in favor of convicting Trump to reach the required two-thirds majority.

The Republican senators who voted in favor of impeachment on Tuesday were Lisa Murkowski from Alaska, Bill Cassidy from Louisiana, Susan Collins from Maine, Mitt Romney from Utah, Ben Sasse from Nebraska and Pat Toomey from Pennsylvania.

Cassidy has been the only Republican who has changed his vote with respect to the procedural vote last January, CNN recalled.

The riots left five dead, including a Capitol police officer. Two other officers died by suicide in the weeks after the violence. For these facts, the impeachment against Trump has been presented for a single article for incitement to insurrection.