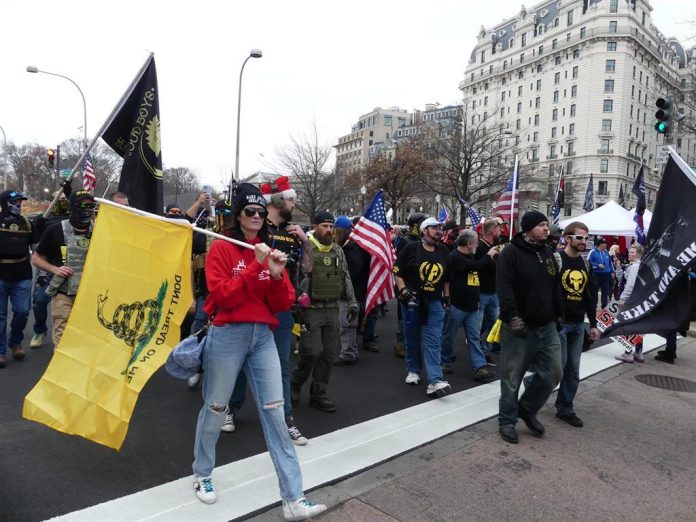 Hundreds of supporters of the President of the United States, Donald Trump, gather this Tuesday in Washington to protest against the validation of the triumph of Joe Biden in the presidential past, coinciding with the official vote of Congress to certify the votes cast by the Electoral College.

It is expected that on Tuesday and Wednesday several groups related to President Trump, including conspiracy theorists and members of the extreme right led by the Proud Boys, will hold several events in which they will unleash accusations of electoral fraud that the still head of the White House has been pitching since it was defeated in the presidential elections.

“Washington is being overwhelmed by people who do not want the electoral victory to be stolen by the emboldened Democrats of the radical left. Our country has had enough, they will not take it anymore! We listen (and love) you from the Oval Office. Make America Great Again! “Trump wrote on Twitter.

“I hope that the Democrats, and more importantly, the weak and ineffective RINO section of the Republican Party, are looking at the thousands of people arriving in Washington who will not accept the theft of a landslide election victory,” Trump said. .

The “RINO section” referred to by Trump is a pejorative way of referring to elected Republicans (Republican In Name Only) as they govern and legislate in favor of the Democratic Party.

Given the arrival of the protesters, and in anticipation of possible clashes with other groups, the Washington authorities have decreed the closure of some roads, as well as restrictions on parking and traffic in the center of the city at least until Thursday.

The National Guard will be deployed to assist Washington Police officers and Mayor Muriel Bowser, who has not ruled out implementing a curfew, has warned residents to avoid the city center during protests.

For their part, some merchants, according to the NBC chain, have protected their establishments by placing wooden boards on their doors and windows, given the possibility of new acts of violence even greater than those that were registered at the end of last year.

In the demonstrations called by Trump supporters on December 12, around thirty people were arrested and at least four assaults with a knife were recorded, as well as half a dozen churches of the African-American community attacked.

“Antifa is a terrorist organization, stay out of Washington. The police are watching you very closely!” Trump has asserted in reference to some of the protesters and anti-fascist groups that in the past have staged clashes with their supporters.

THE LEADER OF PROUD BOYS RELEASED
The leader of the Proud Boys, Enrique Tarrio, has been released this Tuesday, after being arrested on Monday upon his arrival in Washington to participate in the protests, accused of riots and destruction of property during the protests held in December in the capital. .

In a statement, the Washington Metropolitan Police Department explained that Tarrio, who also leads the Latinos For Trump platform, was in possession of two firearm magazines and a “high-capacity device” when he was arrested on Monday. reports CBS.

In that last demonstration, Tarrio set fire to a banner of the Black Lives Matter movement in front of a well-known church of the African American community in Washington, after tearing it from the facade of the building.