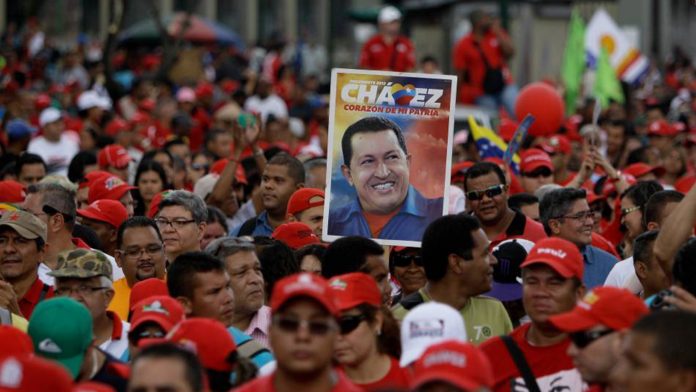 Chavismo and the opposition led by Juan Guaidó have started their respective assemblies this Tuesday, with each of the two parties claiming to be legitimate representatives of Venezuela and appealing to an international community that is equally divided on the internal political situation.

Chavismo, grouped under the banner of the Great Patriotic Pole, won a comfortable victory in the parliamentary elections on December 6. He won 253 of the 277 seats up for grabs in elections that the bulk of the opposition, led by Guaidó, did not attend.

The deputies related to the Government of Nicolás Maduro have paraded from the Bolívar Square in Caracas to the Federal Legislative Palace to start the inauguration ceremony. A wreath and images in memory of Simón Bolívar and Hugo Chávez have put the symbolic note to this start, according to the Venezuelan newspaper ‘El Universal’.

The number two of the United Socialist Party of Venezuela (PSUV), Diosdado Cabello, or Maduro’s wife, Cilia Flores, are part of the shortlist of deputies, among which ex-minister Jorge Rodríguez, already proposed as head of the new Parliament, stands out. .

Maduro, who has not attended the start of this “new cycle”, has used Twitter to express his “immense faith” in this new Assembly: “Together we will take a great leap towards the recovery of the economy, reconciliation and the defense of the national peace “.

For his part, the Venezuelan Foreign Minister, Jorge Arreaza, has celebrated the installation of the new National Assembly through his Twitter account, where he has also indicated that “the coup operation that used the legislative power as a platform has come to an end and that it was supported by governments and interfering powers. “

“Democracy and the Constitution triumphed. May everything return to the course of peace,” he added, while noting that Venezuela “is raining” congratulations “from all over the world” for “having managed to reinstitutionalize the National Assembly in peace. “. “Worthy parties, movements, personalities and governments today also feel vindicated”, he concluded.

The Government claims that these new deputies are the legitimate legislators for this new stage (2021-2025), with which Chavismo wants to turn the page to five years in which the National Assembly has been dominated by the opposition –although disabled ‘of facto ‘by the decisions of the Supreme Court of Justice (TSJ) -.

THE GUAIDÓ ALTERNATIVE
In parallel, and in an alternative place to the legislative headquarters, the deputies of the current National Assembly have organized another act to claim its continuity, claiming that the December elections lacked sufficient guarantees and that there cannot be an institutional vacuum.

Guaidó, who in January 2019 proclaimed himself the country’s ‘president in charge’, asserting precisely his legitimacy vis-à-vis Maduro, has launched a new call for “unity” to face one last attempt to put an end to the “usurpation” that would represent the current government.

“We are standing here,” said Guaidó when he took the floor, in a speech with which he wanted to appeal to “institutionalism” and defended the representation of a “majority” in front of Maduro. The opposition called a consultation in December to demonstrate the existence of this majority.

“We want to build the transition,” said Guaidó, who has accused the Government of spending weeks “intimidating” the current deputies, whom he would have threatened to arrest if they went ahead with the act that finally took place as planned.

SURVEILLANCE NEXT TO THE HOUSE
The National Communication Center, which manages the press of the cabinet led by Guaidó, has shared images on Twitter with which it intends to denounce that the “henchmen of the dictatorship” of Maduro keep “surrounded” the house of the ‘president in charge’.

Guaidó himself has shared these images on the same social network. “This is the method of the dictatorship and by which they are singled out for crimes against humanity,” he said, convinced that he will be able to overcome this and other “obstacles.”

“While the dictatorship tries to generate terror and militarize Parliament, we will be installing the new period of the legitimate National Assembly,” he insisted, speaking of a “constitutional continuity” as the only alternative to the “atypical situation” that the South American country is going through.

In this sense, he has advocated avoiding “a power vacuum”. “As there are no legitimately elected deputies for this new legislative period, it is up to the Parliament elected in 2015 to continue in office until there is a valid election,” he argued.

“Leaving the country without the only legitimate elected body would be contrary to the reestablishment of constitutional order and would take us away from the possibility of solutions to the crisis, which involves free presidential and parliamentary elections,” emphasized the leader of Popular Will.

From Spain, Leopoldo López, also a member of Popular Will, has admitted that “these are moments of uncertainty and fear, but also of courage”, and has questioned whether the dictatorship wants to “dress invincible” by forcing the renewal of Parliament.

INTERNATIONAL DISCREPANCIES
At the international level, there have been messages in favor and against each of the assemblies, without significant changes in position, waiting for the European Union to pronounce on the status that Guaidó recognizes as of this Tuesday.

The Secretary of State of the United States, Mike Pompeo, has affirmed in an interview with Bloomberg that Guaidó continues to be the “president” of Venezuela, a recognition that has also been granted publicly in the last hours by the Minister of Foreign Affairs of Canada, François- Philippe Champagne.

“Faced with Nicolás Maduro’s claim to install a new ‘assembly’ based on the electoral farce of December, the Brazilian government reiterates its recognition of the legitimate National Assembly elected in 2015 and its commitment to the democratic forces,” the chief said of the Brazilian diplomacy, Ernesto Araújo.

There have also been messages from Maduro’s allies, including Cuba, who has sent his own delegation to witness the inauguration of the Chavista Parliament after its “resounding victory” in the election, according to the Cuban Foreign Ministry.

For his part, former Bolivian president Evo Morales has pointed out that the Chavista assembly started from the “sovereign will” of the citizens, which “expressed itself democratically at the polls.” “We congratulate and wish success to the assembly members who are taking office today,” he added.