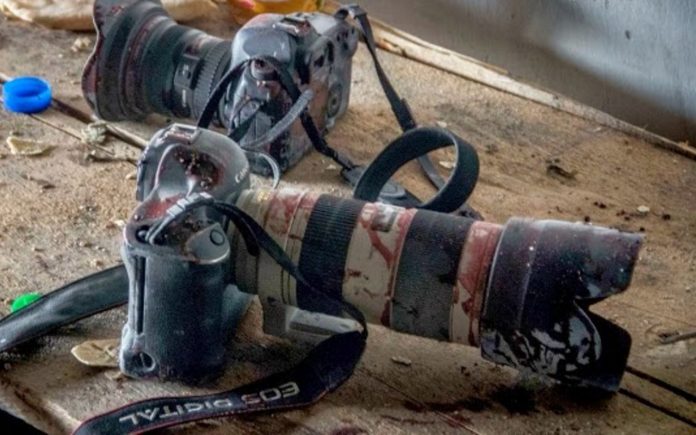 “In 2020 we have witnessed the relevance of journalism for our democracies and for the protection of human rights. However, the COVID-19 pandemic has been the perfect storm that has affected press freedom in all parts of the world ”, Audrey Azoulay Director General of UNESCO.

In this year 2020, a total of 59 murdered journalists were registered, four of them women. Latin America and Asia Pacific were the most lethal regions for these professionals, with 22 informants killed in each one, the Arab countries added nine murders and Africa six.

These crimes continue to be committed with great impunity, according to the report on the safety of journalists published in November by the UN agency, which shows that in 2020 there were no consequences in 87% of cases. The unpunished attacks against journalists weaken press freedom at a historical juncture that makes accurate information particularly important, warned Audrey Azoulay Director-General of UNESCO.

The tenor of the pandemic and the crisis that it has caused has endangered the survival of many media, due to the “massive” loss of advertising revenue, which has also resulted in a precariousness of the workers’ conditions, along with it , the declaration of emergency situations in some countries to counteract the spread of the virus has served as an excuse to restrict freedom of information and expression, while many reporters have been persecuted for having reported errors in fighting the pandemic, denounced the UNESCO, which indicated that in the last 10 years a journalist was assassinated in the world every 4 days, to which is added impunity when it comes to elucidating these crimes, which reached 87% this year, only one point better than in 2019.

The working conditions of media professionals continue to be worrisome throughout the world “, as evidenced by the increase in cases of harassment or the difficulties in covering the demonstrations that have taken place in many countries, which is why In total, UNESCO registered 125 demonstrations in 65 countries in which professionals of the press have been attacked or arrested in the first half of the year, in the same way it also warned of the safety of the work of journalists, who suffer the double threat of their occupation and their gender, which has led the organization to launch an investigation.

A global survey on the subject in October found that 73 percent of participating communicators had experienced online violence and 20 percent said that these attacks were followed by other abuses or face-to-face attacks.

In Mexico, five states of the country concentrate 51% of cases: Veracruz, Oaxaca, Guerrero, Tamaulipas and Chihuahua, while, of the 38 homicides registered in the current administration, 42% are centered in three entities: Sonora, Guerrero and Veracruz So far in 2020, in Mexico they had a significant rebound. During the administration of Andrés Manuel López Obrador, two homicides were registered during December 2018, 17 in 2019 and, finally, in 2020 there are 19 murdered journalists, a figure that makes it the year with the most homicides of communicators in the last decade, as well as the grievances committed against journalists and those who exercise freedom of expression, some of the victims were incorporated into the Protection Mechanism for Human Rights Defenders and Journalists.

As for details about the profile of the journalists, it is found that 17% were women, while the other 87% were men, in turn, these were dedicated to covering red notes, police notes, political notes, also Homicides were committed against journalists who were engaged in sports and culture, and there is a registered case of homicide against an investigative journalist. On the other hand, the profile of the aggressor is linked in 73% to criminal activities, 26% to organized crime, 47% to common crime and 9% of the cases are blamed on public servants.

The undersecretary of Human Rights, Population and Migration, Alejandro Encinas Rodríguez, accepted that there is a lack of work on judicial processes, since only 5% of the 38 homicides registered in the last decade have a sentence. However, he points out that for the other cases, investigation folders have been opened that are still in process, so that in the López Obrador administration, 516 people have been incorporated into the Federal Protection Mechanism, which is equivalent to an increase 60% compared to 798 people who were before. There are currently a total of 1,313 people incorporated.

The Hispanic American Press Congress, like other journalistic institutions, have denounced how in Mexico so far in 2020, 19 journalists and social communicators have been murdered and, even though the murderers are known, justice has not been done to justify them, applying the law and convict them of homicide, as in other countries of the American continent, so that when such crimes go unpunished, this encourages the repetition of similar violent acts and can result in the silencing of journalists, social communicators, and self-censorship. , reporters, photographers.

Likewise, the Hispanic American Press Congress, stimulate, promote, develop ideas in favor of the right to express, disseminate, seek, receive and share information and ideas without fear or illegitimate interference, essential for our education, to develop ourselves as people, to help our communities , access to justice, enjoy each and every one of the rights that appear in the Universal Declaration of Human Rights of the United Nations, UN and the OAS, for which we also invoke “Cease fire, crime, injustice, abuse, censorship, intolerance and the murders that are commented on journalists, social communicators, reporters, photographers in the world ”.

In November of this year, UNESCO launched a global campaign to raise awareness of the importance of journalists’ safety, with the slogan: “Protect journalism. Protect the truth ”.