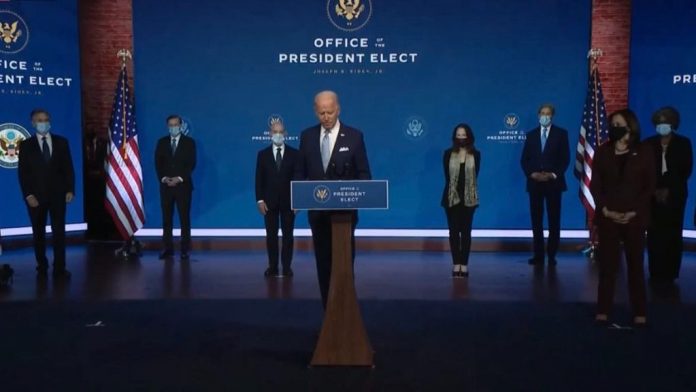 The president-elect of the United States, Joe Biden, announced this Wednesday that in the 100 days following his assumption of office next January 2021, he will present a bill to the Senate “that will give the opportunity to obtain nationality to more than eleven million undocumented people “, although everything indicates that the Republicans will maintain the majority in this chamber.

In his first days at the helm of the White House, Biden, as he has advanced in what has been his first televised interview for NBC since his virtual victory in the elections was confirmed, also plans to cancel some of “the most damaging executive orders “issued by his predecessor and still president, Donald Trump, which especially affected the environment and the health of Americans.

Biden had already announced that he would revoke the actions and executive orders that Trump had promoted with respect to the environment, which have meant the revocation of more than 100 environmental regulations, including the Clean Air Act and the Clean Water Act. Biden has also lamented that the Environmental Protection Agency (EPA) was “unraveled” during the Trump Administration.

The president-elect has also confirmed that during his first day sitting in the Oval Office, he will once again include the United States in the Paris Agreement, the global climate pact from which Trump withdrew Washington and whose exit became effective this same month of November.

He has also made reference to health issues, especially the United States’ strategy to face the pandemic, which has already left almost 12.6 million accumulated cases and close to 260,000 deaths.

In this sense, he has explained that he will promote or support different initiatives, such as the financing of state and local governments that have significant income losses and that, therefore, are forced to cut their budgets due to the health crisis.

However, and aware of the obstacles that his Administration may face if it does not obtain a majority in either of the two US chambers, Biden has stressed that “everything will depend on the cooperation that it can and cannot obtain from Congress.”

Everything indicates that Republicans will maintain the majority in the US Senate, which can make it difficult to pass Biden’s agenda, while the US Congress has struggled for months to approve the stimulus packages against COVID-19.

COOPERATION FOR TRANSITION
During the interview, Biden also stressed that his transition team will no longer be “so far behind”, after the Trump Administration has begun to cooperate, although the president himself still does not recognize his defeat and insists on the accusations of electoral fraud.

The exchange of reports on the fight against the coronavirus and access to intelligence reports are being the first steps, he said, after the United States General Services Administration (GSA, for its acronym in English) indicated that I was ready to start the paperwork.

“There has been no resentment so far. And I do not expect there to be. So yes, it has already begun,” he had an impact on the transition between both teams.