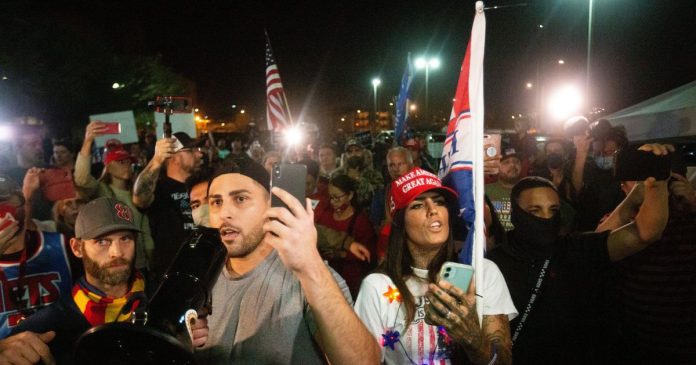 A group of supporters of the Republican candidate and current president of the United States, Donald Trump, surrounded a vote-counting center in Maricopa County, Arizona, on Wednesday, shouting “count the votes!”

In images taken by a team from the US chain CNN that were at the scene, a group made up of several dozen people is seen, several of whom would be armed.

According to the local newspaper ‘Arizona Republic’, the protesters, about 200, have subsequently dispersed, without incident, and only around thirty have remained in front of the center, waiting for updated results.

In this sense, the county electoral department has assured in a statement that the staff would continue with their work, “which consists of administering the elections in the second largest jurisdiction in the country.”

During this Wednesday, Trump has proclaimed his victory without waiting for the votes to be counted in all the states and his team has filed several lawsuits in disputed states such as Michigan, Pennsylvania and Georgia to stop the vote counting.

However, in Arizona, the situation is different, since Trump is behind in the count with respect to Joe Biden and he needs to continue counting to see if he has a chance of snatching the Democratic candidate this state.

As the local electoral authorities have clarified on Twitter, the count will continue despite the concentration. Sources of the ABC chain, have assured that the concentration for the moment has developed in a “peaceful” way and there are no arrests.

The Arizona result is being debated by the media and experts, since both the AP agency and the Fox News network have already selected Biden as the winner, while other media such as CNN or ABC News maintain that it is still a been in dispute.

As it is, the Democrat’s lead has shrunk with the latest tally update in Arizona. Maricopa County, the most populous in the state and where Biden has his main voting ground, has offered new data that gives the Democrat 912,585 votes and 838,071 for Trump – compared to the previous 887,457 and 802,160.

The county counting department has clarified that there are still “about 275,000 votes to be counted, in addition to provisional votes” and has advanced that it is not planned to publish new data until 7:00 p.m. on Thursday. With this update, Biden maintains an advantage over Trump of about 69,000 votes.