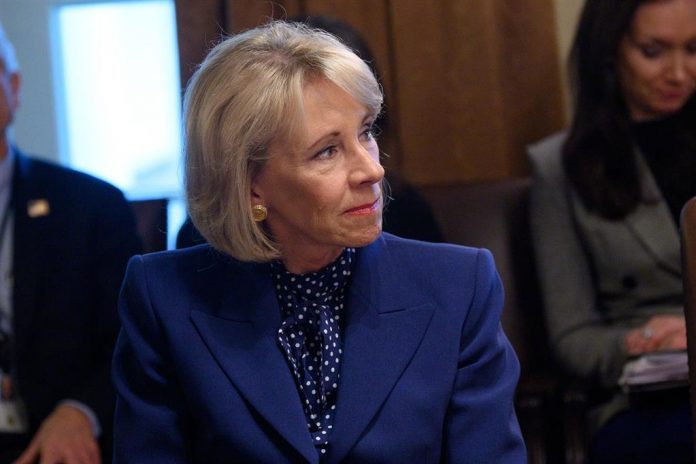 The US Secretary of Education, Betsy DeVos, assured this Sunday that the reopening of schools in the country does not represent the danger that critics of this decision want to believe, and has insisted that it will cut funds for schools. that they do not completely resume learning in person.

“There is nothing in the data to suggest that children who attend school are in any way dangerous. We know that children contract and have the virus with a much lower incidence than any other part of the population,” he said in comments. to Fox News.

“Parents hope their children have a full-time learning experience this fall, and we need to deliver on that promise,” she added.

Last week, Trump and DeVos began to vigorously defend that public elementary and secondary schools, as well as universities, would completely reopen students in the fall despite the current spike in COVID-19 cases in many parts of the country.

The secretary has repeated her threat to withdraw funds to schools that do not meet the standard. “If schools aren’t going to open, they shouldn’t be getting the funds,” DeVos added on Fox. “We will give it to families.”

Later, in an appearance on CNN, the Secretary of Education insisted that “the norm requires that children return to school this fall” before adding that teachers who are at greater risk of contracting coronavirus due to their age or medical problems Previous “must resolve it with their local school districts.”

Minutes later, the Democratic leader in the House of Representatives, Nancy Pelosi, denounced DeVos’ words on CNN. These comments are “a breach of duty and are playing with the health of our children,” he lamented.

“Just after hearing what the Administration says, one knows that they are not aware of the failure that has brought us to this point. Returning to school presents the greatest risk of the spread of the coronavirus. They ignore science and ignore the laws of good government to make this happen, “he lamented.