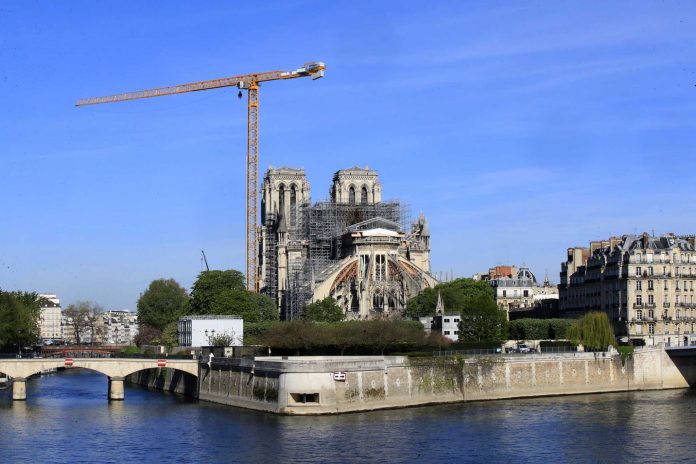 The President of France, Emmanuel Macron, expressed his thanks on Wednesday to those who prevented the Notre Dame Cathedral from collapsing in the fire exactly a year ago and has reaffirmed its commitment to complete the reconstruction in five years, despite the delay due to the coronavirus pandemic.

“We will rebuild Notre Dame in five years. I promised. We will do everything we can to meet the deadline,” Macron said, in a video posted on his Twitter account to coincide with the first anniversary of the fire, which caused severe damage to the roof of the iconic Parisian cathedral.

Work on the temple has been halted since the confinement order to contain the expansion of the coronavirus came into effect on April 16 – “they will resume when possible,” Macron said – and the rebuilding work itself has not. have begun. The scaffolding that melted in the central area is still not disassembled.

“If the restoration of Notre Dame matters to all of us, it is because it is a symbol of the resilience of our people, of their ability to overcome difficulties,” stressed the French leader, who is confident that the day will come when “the Notre Dame’s arrow will rise again “above the Paris sky.

THANKS TO DONORS
Macron appreciated the efforts of those who initially responded to the emergency and “saved the cathedral from the flames”, as well as the “formidable wave of generosity” that France received in the hours and days that followed. In this sense, it has recognized the contributions of 340,000 donors “from all over the world”.

Only the Heritage Foundation has reported in a statement that, in the last year, it has collected almost 228 million euros from more than 236,000 citizens and companies in 140 countries. The majority (232,000) are private donors who have contributed an average of 109 euros, according to this body, which has given 92.7 percent of donations as “closed and definitive”.