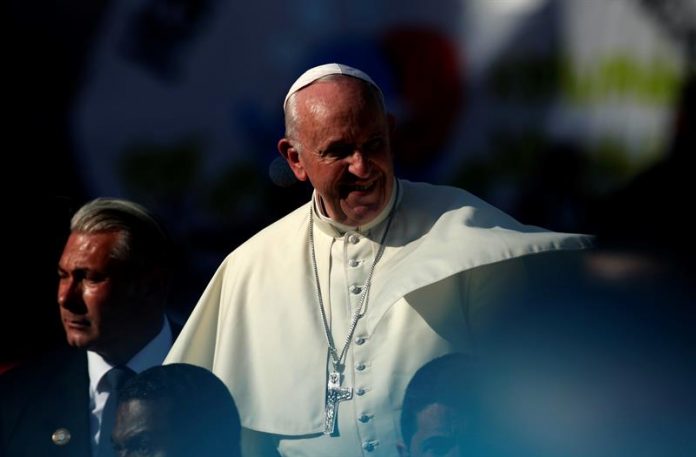 Pope Francis has asked for a world free of nuclear weapons this Sunday during his visit to Nagasaki and has criticized the “catastrophic” impact of its use from a humanitarian and environmental point of view.

“With the conviction that a world without nuclear weapons is possible and necessary, I ask political leaders not to forget that they do not defend us from threats to national and international security of our time,” said the Pontiff in his speech at the Atomic Bomb Hypocenter Park in the Japanese city.

“A world of peace, free of nuclear weapons is the aspiration of millions of men and women,” he added, while requiring the participation of “people, religious communities, civil society, states that possess nuclear weapons. and those that do not, the military and private sectors and international organizations “for this purpose.

In parallel, Francisco has appealed to consider the humanitarian and environmental impact of nuclear weapons that, as he has denounced, “wastes valuable resources that could be used for the benefit of the integrated development of peoples and for the protection of the environment.”

“The current state of our planet demands for its part a series reflection on how these resources could be used in the complex implementation of the 2030 Agenda”, Francisco has suggested, which has also described as “continuous attack that cries to heaven” the fact that millions of children and families live in “subhuman” conditions while spending large amounts of money on the “manufacture, modernization, maintenance and sale of increasingly destructive weapons.”

In this context, he stressed that the possession of nuclear weapons and other weapons of mass destruction undermines the human “longing” for “peace and stability” and “seems to continually put it to the test.”

“Our world lives the perverse dichotomy of wanting to defend and guarantee stability and peace based on a false security supported by a mentality of fear and distrust that ends up poisoning relations between peoples and preventing any possible dialogue,” he said in his speech.

“TRUST”
“Peace and international stability are incompatible with any attempt to build upon the fear of mutual destruction or a threat of total annihilation,” the Pontiff continued.

Thus, he has insisted on the value of “trust” to respond to the existence of nuclear weapons, and has urged to break “the dynamics of distrust currently prevalent,” which “risks running the dismantling of the international architecture of gun control. “

“We can never get tired of working and insist quickly in support of the main legal instruments of nuclear disarmament and non-proliferation, including the Treaty on the Prohibition of Nuclear Weapons,” Francisco concluded.

THIRD WORLD WAR IN PIECES
Later, during the homily of the mass held at the city’s baseball stadium, Francisco stressed that Nagasaki, carries in his soul “a wound that is difficult to heal” that is a sign “of the inexplicable suffering of so many innocents”: “Victims hit for the wars of yesterday –he said–, but they continue to suffer today in this third world war to pieces “.

In this sense, according to Vatican News, the Pope has asked not to lose his memory “of what it means to bear the suffering of so many innocents” and not to fall “into the wild atmosphere of the easy and indifferent cry of ‘save yourself’ “Well, as you have remembered,” these lands experienced, at least, the destructive capacity that human beings can reach. “

Before this reminder, the Pope has exhorted the faithful present to raise their voices in a common prayer for all those who today are suffering in their flesh this sin “that cries out to heaven,” and “so that more and more are those who, as the good thief, be able not to silence or mock, but with your voice prophesy a kingdom of truth and justice, of holiness and grace, of love and peace. “

The Pope has also cited the example of the thousands of martyrs who have marked the spiritual heritage in the country, such as Saint Paul Miki and his companions and whose steps they must follow to overcome “over all types of hatred, selfishness, mockery or evasion.”

Finally, he has assured that the Catholic faith is “in the God of the Living.” In this sense, he stressed that the mission as missionary disciples is to be witnesses and heralds of what will come.

“We cannot resign ourselves to evil and evil, but it drives us to be the leaven of his Kingdom wherever we are: family, work, society – he stressed – The Kingdom of Heaven is our common goal, a goal that does not it can be only for tomorrow