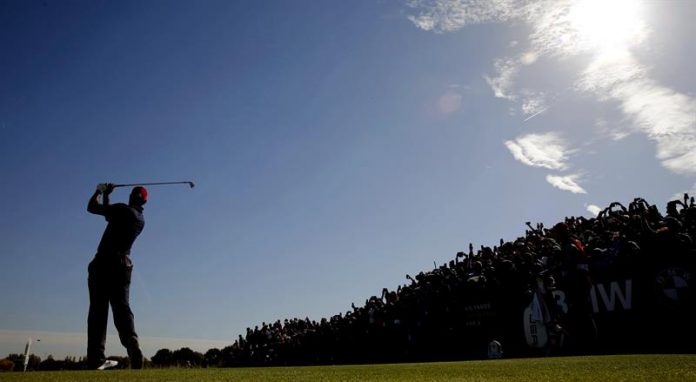 President Donald Trump has begun his first visit to Mar-a-Lago (south Florida) after the partial closure of the federal administration with a golf session this Saturday morning with legendary player Jack Nicklaus and Tiger Woods.

As reported by the pool of journalists who accompany him, White House press spokesmen confirmed that the president plays with the renowned golfers in the Trump National Club, located in Jupiter, and where he expects to spend the rest of the morning.

Trump landed Friday night aboard Air Force One at the Palm Beach International Airport, next to the first lady, Melania, their son, Baron, in addition to his daughter Ivanka, her husband, Jared Kushner, and the three children of the couple.

The delegation immediately went to Mar-a-Lago on a journey in which both sympathizers and detractors stood with banners on the road to the property of the president.

Trump will remain until Sunday on his first trip to Mar-a-Lago, his winter residence and social club in the coastal town of Palm Beach, from the holidays for Thanksgiving, at the end of last November. , and the number 19 since he assumed the Presidency.

The president was scheduled to spend the holiday season there, but canceled his trip due to the partial closure of the US Administration that originated because of the more than 5,000 million dollars he requested in the federal budget for his promised wall in the border with Mexico, and that the Democrats reject.

On January 25, Trump signed a decree that provided funds for the next three weeks to the Administration and thus allowed its reopening after a partial closure of 35 days, begun on December 22 and the longest in the history of the country, although he did not contemplate funds for the wall.

According to the agenda distributed by the White House, the president and the first lady are scheduled to attend a party at the Trump International Golf Club on the night of Sunday for the Super Bowl, the final of the American football league.