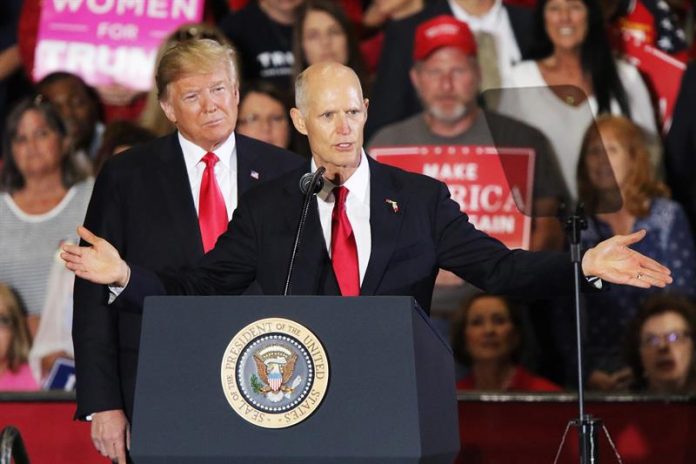 Rick Scott, the outgoing governor of Florida, has won the federal Senate seat held since 2001 by Democrat Bill Nelson, whom he has defeated in a very disputed contest and defined by just over 10,000 votes.

“It has been a rewarding trip, as well as a very instructive experience,” Nelson summarized in a message to his people on video, in which he agreed not to be “victorious” from the bitter race he had with Scott, who did not hesitate Disburse at least $ 60 million of your personal fortune for your campaign.

The message of the veteran senator, and with 42 years of public service, was given after the new results of the manual count made by the 67 Florida counties, and ordered last Thursday after the mechanical count reflected a difference of just 0, 15% between both contestants.

“In no way do I feel defeated, and that’s because I’ve had the privilege of serving the people of Florida and our country for most of my life,” said Nelson, who later, in what appeared to be a message to the incoming Senator, recalled: “a public office is a public trust.”

After Nelson’s concession, and twelve days after the mid-term elections, in which the Republicans held the majority in the federal Senate and the Democrats took control of the Lower House, the electoral process in Florida seems at last to have abated.

Nelson’s legal team had filed lawsuits to extend the deadline for the mechanical count, and to accept ballots sent by postal mail and that they had reached the deadline, both rejected by the magistrate Mark Walker.

The campaign of Scott in turn filed lawsuits against the electoral observers of the counties of Palm Beach and Broward, the latter in the public eye first for failing to meet deadlines for the results and then, between other accidents, after revealing that they had mixed more than 2,000 votes.

None of this, however, modified the first results of the past November 6, in which although by little margin, Republicans Scott and Ron DeSantis, both with the support of US President Donald Trump, were winners in the races at Senate and the Government, respectively.

The mayor of Tallahasse, the Democrat Andrew Gillum, left the night of the intermediate elections to grant the victory to DeSantis, however he backed down when the official results reflected that the advantage between both was smaller to half a percentage point and, according to Florida laws, a mechanical recount was necessary.

“Let each legal vote paid be counted,” Gillum demanded until Saturday afternoon, that is, a few days after the mechanical count placed him below DeSantis by some 34,000 votes.

That day, in a video message with his wife, R. Jai, African-American Gillum, who has been seen as a representative of the “new progressives” within the Democratic Party and was endorsed by former President Barack Obama, granted at the end the victory to the republican.

“This was a very close campaign, now is the time to unite Florida,” said DeSantis, a protagonist in a race in which he was accused of being a racist.

After the results in this state, among the largest in the country among the undecided states, some analysts have highlighted that in the face of the general elections of 2020 the Government and the only two senators representing Florida, including Marco Rubio, are Republicans

“From the first day, Rick Scott never wavered, he was a great governor and he will even be a better senator representing the people of Florida, congratulations to Rick for having launched such a brave and successful campaign!”, Wrote the president jubilantly. Trump, known today’s results.

After the deadline for the 67 counties to hand over the results of the manual count of more than 93,000 ballots that reflected errors after the November 6 ballot, the Secretary of State will have to certify the official results of the elections next Tuesday.