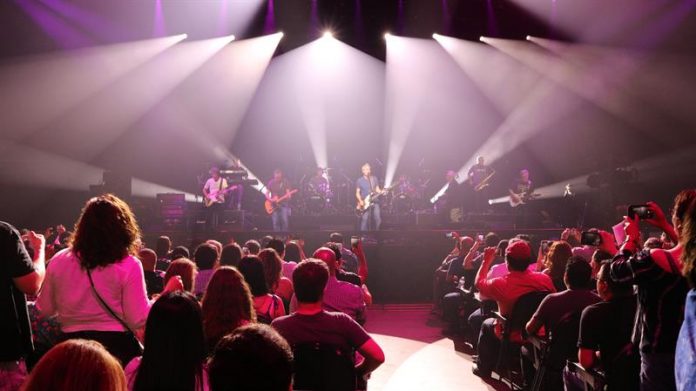 The Spanish band Hombres G and the Argentinean Enanitos Verdes today offered an emotional and intense concert in the city of Mérida, capital of the state of Yucatán, southeast of Mexico, before more than 7,000 people.

The followers of both groups, gathered in the Yucatan Coliseum, were transported to the 80’s, as part of the second stage in Mexico of the world tour “Scrambled Eggs Tour” that star in both sets.

The bands were given to the public that tasted the songs one by one like that good wine that the older it tastes richer and more intense, achieving with the lyrics a mosaic of romance, madness and frenzy.

With each stanza, the Men G and the Enanitos showed that they are great on the stage and the good vibes they shared with the fans of southeastern Mexico was similar to the one they left in Spain, Latin America and the United States.

Although at the beginning of the year they were in Mexico, this second round included the cities of Culiacán, Ensenada, Monterrrey, Mexico City, Mérida (14) as well as León and Guadalajara, which will be held on Friday and Saturday.

In Mérida, the concert was exciting: young people and adults moved with the classic guitar sounds of both bands, while others imitated the musicians while the girls shouted and others sang, remembering the years when the bands were in their apogee with the Rock movement in your language.

The night of “Egvos Revuertos Tour” was memorable in every way, because the G Men and the Green Dwarfs demonstrated, in more than two hours of concert, that they are still popular, that their voice does not go out of style and that their talent is still intact, like more than 30 years ago.

In the Colosseum the audience responded with long and intense applauses and the more than 7,000 people coupled their voices to interpret the successes of each band.

The musicians also applauded and smiled at the devotion shown by the youth and adults, “thank you Mérida, it’s a pleasure to come here,” Summer said in farewell.