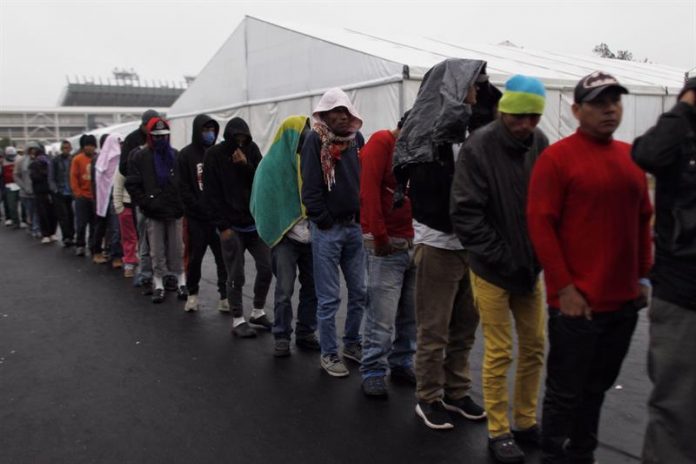 Winter suddenly arrived in Mexico City today, where the incessant rain and low temperatures hit the second caravan of Central American migrants, who are encamped in a sports complex in the capital.

Coughing, throat clearing, spitting and shivering enveloped the environment of a sports city divided by a river of water that migrants could cross thanks to strategically placed bricks.

People who have savings left the camp to buy hot noodles at a nearby store, while the rest had to resign themselves to the cold coffee delivered by humanitarian organizations that had no way of keeping it warm.

“It’s frozen, it’s no use at all,” Kevin said with an ironic smile, a Honduran with his face covered with a handkerchief and a cap with the Catalan flag he got at the camp’s clothing delivery stations.

This Honduran of about 30 years left his country in the direction of the United States, where his parents live, accompanied by a coyote (smuggler of people) who paid money to accompany him.

After being assaulted in the eastern state of Veracruz by people with “machete”, he decided to join the migrant caravan and keep intact his goal: “If you do not take risks, you do not get anything,” said the Honduran, who said he did not feel his fingers .

It is the first time that Kevin and the rest of the 3,000 migrants gathered in the capital now suffer so cold, having traveled nearly 2,000 kilometers through areas with warm and temperate climates.

The same space that just a week ago hosted the first Central American caravan under a scorching sun, is now the scene of people who cover themselves with what they can, trash bags included, and many masks to avoid spreading colds.

“You cough more and more, like you want to cough and you can not, you get all the infections, that’s what hurts me and the children, who are not adapted to this climate,” Jorge Roberto told Efe. who has left Honduras for 27 days

Despite the cold, this migrant said that the weather does not “affect him to follow the path” and that he is “qualified for what God sends”, although he admitted that the minors are the ones who are suffering the most.

Some volunteers came with bags full of gloves, which quickly caused people to gather around them and the garments run out in a matter of seconds, leaving faces of disappointment among those who did not manage to obtain one.

Jorge, originally from Honduras, wore a somewhat torn shirt and only sheltered himself from the weather with the blanket he was given to sleep last night.

“This cold was not before, it is making a lot of noise and it is doing a lot of damage,” he told Efe as he walked through the camp in search of a medical service post that lent him an ankle swelling cream he suffered two days ago when he fell. of a freight train in which he made his journey.

Beatriz Cañas, originally from El Salvador, carried her children with “two days of fever and fever” but “they are improving thanks to God” with the medicines they were given at the Mexico City camp.

The migrants of this caravan, who entered Mexico on October 29, agreed to continue the road once the weather conditions improve. “It depends on how many days the storm lasts, in three or four days we will continue moving forward, God will help us to keep moving forward,” said Beatriz.