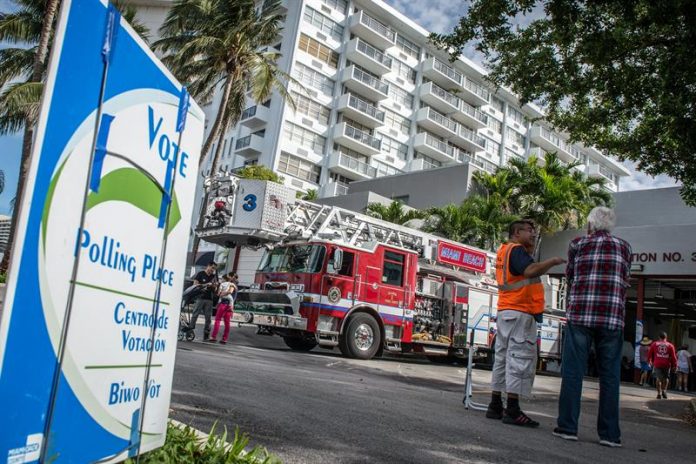 Floridians vote today in the midterm elections that have aroused more interest in recent decades, marked by a high turnout in early voting and attention to governance, which can return to the Democratic Party for the first time since 1999.

About 38% of the more than 13.2 million citizens registered to vote in this state have already paid by mail or in advance, and the majority parties expect that participation will also be a record on today’s election day.

The electoral day passes with total normality and with noticeable affluence of voters in a state that for being one of the so-called “pendular”, those that change the voting pattern in each election, is always seen with attention.

Until 8 pm, when the voting centers of the northwest of the state close, which have a different time zone, the first projections of vote will not be announced and then the first official results will come.

The two candidates for governor, Democrat Andrew Gillum and Republican Ron DeSantis, who closed their campaigns on Monday night, called on voters today to vote.

“Do not believe in the polls and go out and vote,” said Gillum, who, according to recent polls, leads DeSantis by up to 7 points.
The Republican, for his part, wrote today on his social networks: “Let’s finish what we have come here to do, go vote and secure the future of Florida.”

Gillum, born in Miami 39 years ago and the first African-American to aspire to the governorship of Florida, will wait for the result of the elections in the city of which he is mayor, Tallahassee, the capital of the state, while DeSantis, lawyer, ex-congressman and ex-prosecutor in Guantanamo prison, born in Jacksonville 40 years ago, he will do it in Orlando.

The two candidates for governor represent polar opposites in these elections and have been tied throughout the campaign until in the final stretch Gillum began to advance.

In the mid-term elections of 2014 Republican Rick Scott took over the governorship by just over 60,000 votes, an equality that has been repeated in the Florida elections of the last elections.

Gillum is backed by former President Barack Obama and is akin to the positions of leftist senator Bernie Sanders, while his rival has the support of President Donald Trump and continues his political line without departing a millimeter.

Behind the governor’s post, the most important at stake in these elections in Florida is the veteran Democratic Senator Bill Nelson, who is seeking a fourth term, and faces the current governor of Florida, Rick Scott, also backed by Trump.

The polls give Nelson a slight advantage, but it is a tight race like most of Florida’s.

Scott told voters today in an interview with the Fox channel that if they want less taxes they will vote for him and if they want “more money to go to Washington” choose Nelson, who “has not done anything” in his long career as a senator and “all he wants is to stay there (in the Senate) forever.”

According to the newspaper Tampa Bay, the Republican businessman has spent about 150 million dollars of his personal fortune in this campaign and the two previous ones (governorship and re-election), a difficult record to match.

For his part, Nelson urged Floridians to get out of voting because the “future is in their hands,” but only if the electorate makes its voice heard through suffrage.
The candidates for the 27 seats that correspond to Florida in the House of Representatives in Washington show a variety of origins as wide as that of the inhabitants of this state.

In addition to the Cuban-Americans like Carlos Curbelo and Mario Díaz Balart, who are seeking re-election, and María Elvira Salazar, who aspires to the seat left by the veteran Eliana Ros-Lehtinen, the first Hispanic woman to reach the US Congress, there are, among others, Debbie Mucarsel Powell, of Ecuadorian origin, and the Puerto Rican Darren Soto, who aspires to repeat the mandate.

Floridians also vote on twelve constitutional amendments and local and state regulations on a variety of issues, including returning the right to vote to people who served sentences and changing laws to authorize the construction of a soccer team stadium on Miami’s public grounds. directed by Englishman David Beckham.