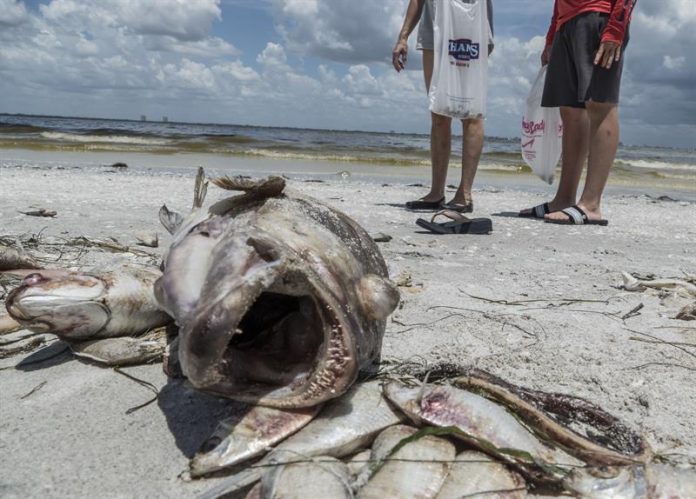 Several cleaning workers are working today in beaches of Pinellas County, in western Florida, which this weekend have dawned with dead fish on its banks and in the sea as a result of the “red tide,” local media reported.

Operators crews headed to beaches in the county of Madeira Beach this Sunday to collect hundreds of dead fish of different sizes that have flooded the banks, reports the local WFLA channel.

It is known as “red tide” to the pollution generated by a microalgae and that produces the death of thousands of fish that the current then drags into the sand, a cyclical phenomenon, although not at the level of this season, in a state like Florida whose main attraction is beach tourism.

Environmental management authorities in Pinellas County told the Tampa Bay Times that the first reports of dead fish this weekend came from the city of Clearwater on Friday, followed by St. Petersburg with alerts on Saturday of “hundreds of thousands.” “of dead fish.

In addition to Madeira Beach, the presence of dead fish has also been reported in Redington Beach and Treasure Island, where operators hired by local authorities also do clean-ups at sea, in order to prevent animals from reaching the shore.

The authorities foresee that the work will continue during the week, in view of the amount of dead fish that float in the water.

The “red tide” entails risks for people, causing respiratory irritation due to the toxins released by these microorganisms.