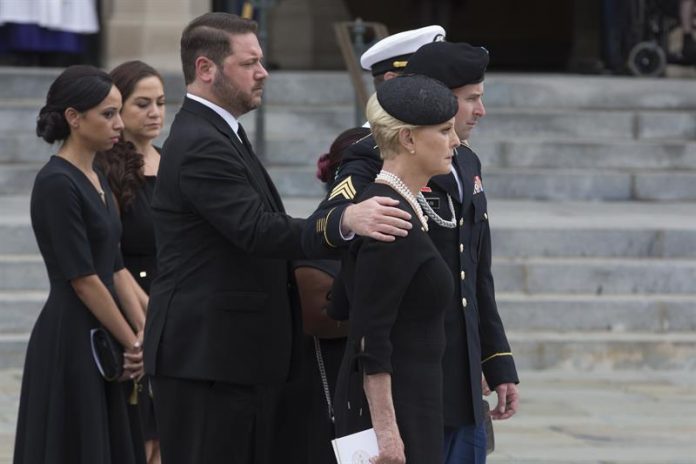 The careful planning of Republican Senator John MCain of his own funeral and tributes has been the last maneuver of the historic politician to demonstrate his antipathy to the president, Donald Trump, who was not invited to any of the posthumous honors.

Shortly after announcing that he was suffering from terminal brain cancer, McCain began to convene meetings in his office in Washington to program to the millimeter what would inevitably happen in the following months: his own wake.

The politician decided from the places of celebration to the music that would sound at each moment, going through the list of guests and people authorized to speak, whom he called personally to ask them to participate in his funeral service, according to former President Barack Obama ( 2009-2017) confirmed in recent days.

McCain, who wanted to make his farewell a meeting place for those who have dedicated their lives to serving the US, petitioned the ex-presidents George W. Bush (2001-2009) and Obama himself to offer individual elegies at the ceremony , although between both they truncated his dream of reaching the Presidency of the country.

In this five-day posthumous celebration that began in his state of welcome, Arizona, and ended today in the cemetery of the Naval Academy of Annapolis (Maryland, USA), the politician wanted to make clear his rejection of Trump.

The senator, in fact, explicitly asked his circle nearby that the president was not invited to his funeral, after tough political confrontations with him, after what Trump came to insult him harshly through social networks.

The turbulent relationship between the two had its peak in the summer of 2015, when Trump said that McCain, veteran of the Vietnam War, “is not a hero.”

“(McCain) is considered a war hero because he was captured, I like people who were not captured,” Trump said then, a statement that was greeted with boos by the public.

The president referred to one of the toughest stages of McCain’s life, a period that began on October 26, 1967 when he was 31 years old.
His plane was shot down over Hanoi and he was a prisoner of war for five and a half years in Vietnam, where he was subjected to severe physical and mental torture.

Trump’s mockery was frowned upon by American society, which tries to recognize the successes of the military in his army, and caused the president to be portrayed as someone who does not respect war veterans.

Thus, while Washington’s staff met this Saturday at the Cathedral of the American capital to give his final goodbye to McCain, Trump went to play at a golf club located on the outskirts of the city.

Bill and Hillary Clinton sat in the first rows of the temple; Barack and Michelle Obama; George and Laura Bush and Al and Mary Elizabeth Gore, but you could also distinguish between those attending senators from across the political spectrum, from the progressive Elizabeth Warren to the Republican and McCain’s great friend Lindsay Graham.

Some of the speeches during the funeral served, in addition, as subtle attacks to the way to govern and to act of the atypical agent chief executive.

Without going any further, Meghan McCain, daughter of the senator, claimed “the greatness” of the United States and assured that the country that his father represented and defended “does not need to be big again, because it always was”.

“The real, not cheap rhetoric for men who will never approach the sacrifice he volunteered so voluntarily, nor the opportunistic appropriation of those who lived lives of comfort and privilege,” said the senator’s daughter, in a veiled allusion to Trump. .

With this strategy, McCain could have the last word in front of a Trump who had to be secluded throughout the weekend at the White House and at one of his golf clubs for not having been invited to the historic Republican senator’s farewell.