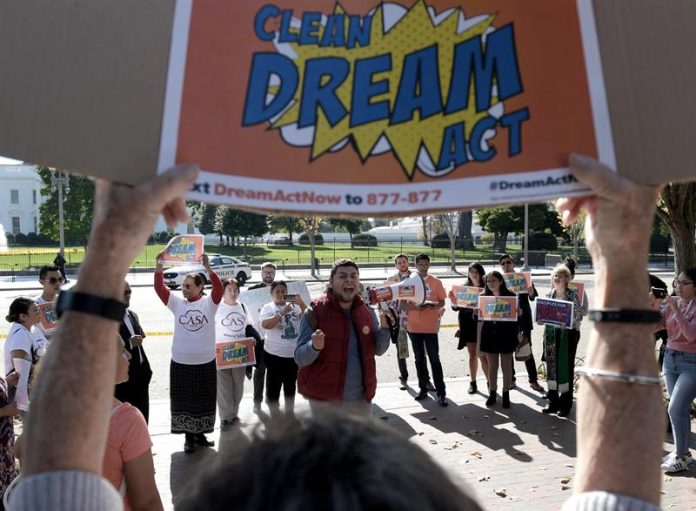 Young immigrants covered under the Deferred Action for Childhood Arrivals (DACA) program leave Arizona in search of better study opportunities in “friendlier” states, because of the difficulty of paying tuition at universities and community colleges.

“In Arizona they took away the possibility of paying as residents, they closed the door to us to finish a career, one semester you were paying as a resident and suddenly the next you had to pay as a foreigner,” Mexican Emily Camacho told Efe. he took refuge in the DACA protection program, promulgated by the Barack Obama Administration in 2012 and canceled by Trump’s last year.

Camacho, who arrived in Arizona when he was only five years old and has already turned 20, made “the hard decision” to leave his family to continue studies in Business Administration at St. Mary’s University in San Antonio, Texas.

“I think if I had stayed in Arizona I could only take one or two classes per semester, my parents can not pay for my sister’s education and mine,” he said in a telephone interview from Texas.

She indicated that private universities in Texas do not have different enrollment for students who are not legal residents in the country, and that for that reason students with DACA like her can pay the same as local students.

Karina Ruiz, president of the Coalition of the DREAM Act (acronym in English for Education for Dreamers of Immigrant Children), told Efe that the impossibility of paying tuition fees as residents in universities and community colleges is having a severe impact on the “dreamers” in Arizona.

“Simply, many can not afford that much money, the options are very few, but we are asking them anyway not to give up and at least continue taking a class,” said Ruiz.

After a long and tough legal battle in the courts, last April the Arizona State Supreme Court ruled that young students with DACA do not have the right to pay tuition at colleges and community colleges at the same price as the residents of the state.

The ruling came about because of a state law passed by voters in 2006 that denies this right to all those who do not have legal status in the United States, no matter how many years they have lived in Arizona or graduated from local high schools. .

The court’s decision tripled the cost of higher education for beneficiaries of the DACA program from one semester to the next.

At the University of Arizona (UA), the so-called “dreamers” will pay up to $ 18,000 per semester when classes begin next Monday.
A local resident pays, in comparison, $ 12,000 for a reduced price given by the high school.

Before the court ruling, more than 2,000 “dreamers” were registered in community “colleges” throughout the state and another 300 attended public universities.

Other students like Karina Guerrero, a 21-year-old Mexican and also a “dreamer”, decided this semester to put on hold her “dream” of pursuing a university career due to “unpayable” rates.

The last semester I was studying at La Estrella Community College, in Phoenix, Arizona, where I was paying approximately $ 2,000 per semester for four classes. Now I would have to pay 6,000 for the same “package” of subjects.

“I decided to work this semester, save to be able to pay and continue my studies in the spring,” said Guerrero, who currently has two jobs.

The young woman only needs four subjects to transfer to a university and obtain a degree in Advertising.

“All my life in Arizona, since I was one year old, it’s very unfair that the state closes our doors to us, we work, we pay taxes,” he protested.

Students with DACA are not eligible for federal financial assistance, so they rely heavily on private scholarships and that is not so easy to achieve.

The “solution” of leaving Arizona and moving to other states such as Texas, New Mexico and California, where enrollment matches the income levels of these young immigrants, is hard because they consider it an “emigration”.

Unlike Arizona, the Mexican Emily Camacho found in Texas better options: she obtained an academic scholarship that currently covers her entire tuition and she only has to pay the rent for books, but that supports her with her work.