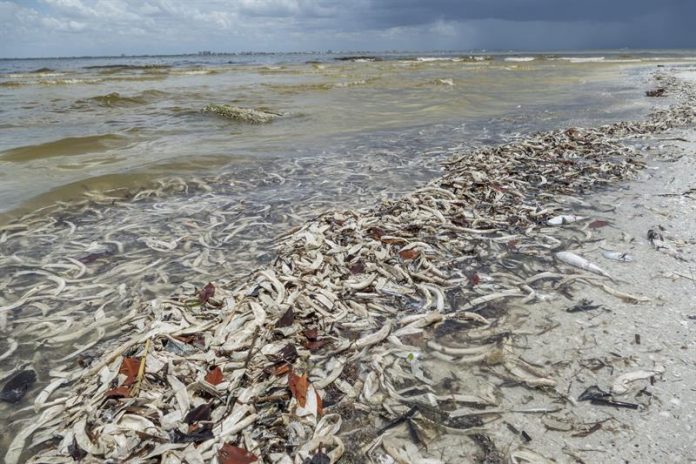 The governor of Florida, Rick Scott, declared today the state of emergency in seven counties affected by the red tide, as it is known to be contaminated by a toxic microalgae that has killed thousands of fish.

Scott’s order allows “significant funds and resources” to be allocated to Collier, Lee, Charlotte, Sarasota, Manatee, Hillsborough and Pinellas counties on the southwest coast of the Florida peninsula and those affected by a phenomenon that occurs almost annually. on these coasts of the Gulf of Mexico, but that had never reached the current gravity.

The funds authorized through the order, which includes $ 100,000 for the Marine Laboratory and Mote Aquarium, in Sarasota, as well as another to the state Commission for the Conservation of Fisheries and Wildlife (FWC), will be used for cleaning of the coasts.

In recent weeks, thousands of fish and other specimens of marine life, such as turtles, dolphins and even manatees, have appeared dead on the beaches of the southwest coast, some of them, such as Sanibel Island, considered among the best of the world for its white sands and its crystalline blue sea.

To the extraordinary measures decreed last week by the State Government to combat this phenomenon and accelerate the cleaning of the beaches, additional funds are now added as a result of the state of emergency signed today, which includes $ 500,000 for the tourist promotion agency Visit Florida.

The above will serve to “establish an emergency grant program to help local communities attract the visitors that support so many Florida families and businesses,” Scott said in a statement issued by his office.

According to the governor, Lee County has received a total of 1.3 million dollars to combat and clean up the effects of the red tide, which in the current season has left many tourists and visitors behind.

The FWC has called on the population to refrain from removing large numbers of fish, such as dolphins, manatees or even whales, and urges that such work be done by the experts.