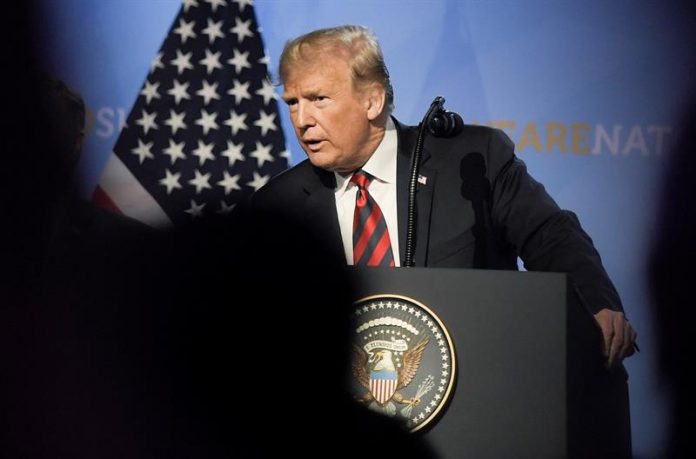 US President Donald Trump warned Iranian President Hasan Rohani today to “never threaten the US again” if he does not want to “suffer the consequences” of history.

“To Iranian President Rohaní: NEVER AGAIN TO THREATEN THE UNITED STATES OR SUFFER THE CONSEQUENCES AS THEY THAT FEW HAVE SUFFERED IN THE STORY BEFORE,” Trump said in a message full of capital letters on his Twitter account.

Trump added that “WE ARE NO LONGER A COUNTRY THAT WILL KEEP HIS DEMENTIATIVE WORDS OF VIOLENCE AND DEATH, BE CAUTO!”.

The president thus responded to the Iranian president who hours earlier had urged Washington “not to play with fire” since starting a conflict with Tehran would mean “the mother of all wars” in a ceremony with diplomats.

“Negotiating today with the United States means nothing more than surrender and an end to the achievements of the nation of Iran, if we surrender to a bullied liar like Trump, they plunder Iran,” he added.

Trump retreated last May to the US from the 2015 multilateral nuclear agreement with Iran and once again imposed sanctions on Tehran, which will come into effect next August and threaten to sink the already battered Iranian economy.

The US president has criticized the previous agreement and has demanded a more aggressive one that limits the Iranian ballistic missile program.

The 2015 nuclear agreement, signed by Iran and the 5 + 1 Group (the US, Russia, China, the United Kingdom, France and Germany), limits Tehran’s atomic program in exchange for the lifting of international sanctions, but this counterpart is now in the air due to the Washington measures.