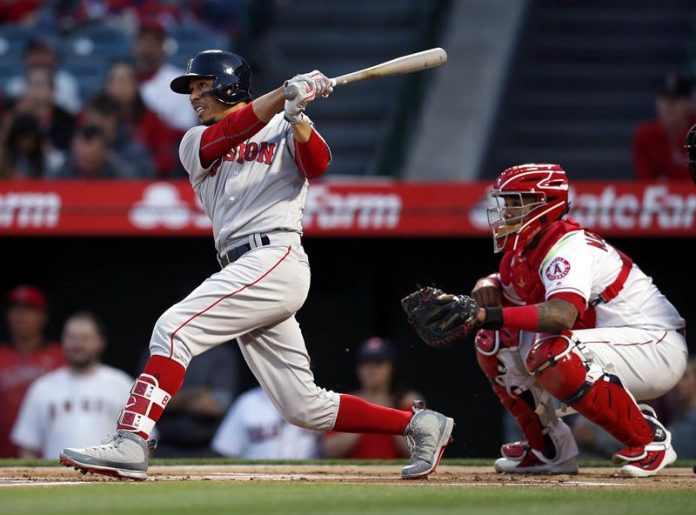 The dominance of the Boston Red Sox was again evident another day in professional baseball in the American League, where he has the best record and increases the lead advantage.

While the Houston Astros confirmed that they have problems with the bullpen, where they do not have the intermediate reliever to give them the support and consistency they need to maintain the lead on the scoreboard.

Betts added a producing single in the seventh inning and went 4-2 to improve his batting average to .352, the best of the majors. He finished with five RBIs.

Boston has the longest winning streak of the majors and has not lost since being beaten by the Yankees 11-1 on July 1 in New York.

Left-hander David Price (10-6) struck out eight for six innings and two-thirds for Boston, and Craig Kimbrel scored his twenty-ninth save of the season.

Dominican outfielder Teoscar Hernandez hit a two-run homer in the first inning and Cuban Kendrys Morales added a solo homer by Toronto, who suffered his fourth loss in five games.

Center fielder Mark Canha singled in two of the three runs scored in the top of the eighth inning and led the comeback of the Oakland Athletics that won at home by 4-6 to the Astros, who beat them by second consecutive game.

The A’s were down early in the game, but reduced the disadvantage to a run with three touchdowns in the fifth inning.

Third baseman Matt Chapman tied the game with a double producer when the A’s had no outs against in the eighth before Canha’s single to relief pitcher Chris Devenksi (2-2) when he was one out to put the scoreboard in his favor 4 -6.

The unstoppable Canha fell in the corner of left field and the Astros protested without result the decision that the ball had fallen inside.

The Venezuelan reliever Yusmeiro Petit (3-2) allowed an unstoppable in two innings a third without annotation and was left with the victory.

Ryan Buchter entered the relay in the eighth and did a perfect job thanks to consecutive plays of inspiration that helped him get the three “outs”.

Closer Lou Trivino was in charge of taking the last three “outs” of the game and achieved the fourth rescue so far this season.

Despite the loss, the Astros with a 62-34 record remain leaders in the Western Division.

Aaron Hicks drove Dutchman Didi Gregorius from the start with a double connected to starting pitcher Corey Kluber when he went one out in the eighth and the Yankees won 4-7 at home to the Cleveland Indians.

With a 3-2 score, Hicks took a shot to Kluber (12-5) that went into the back of the center field, and Gregorius scored easily after bouncing the ball on the wall.

Indian driver Terry Francona chose to keep Kluber in the eighth instead of changing him due to the lack of forcefulness of his relievers, who have the highest AL average admitted.

The Yankees got another score in that inning with a sacrifice fly that Greg Bird shot at the Mexican Oliver Perez.

Chapman got three outs for his twenty-fifth save, in his first performance since Sunday due to a discomfort in his left knee.

Tyler Skaggs threw six solid innings for the Angels on his return from the disabled list.

Pujols hit a two-run homer in the first inning and a solo shot in the sixth. With his three hits of the night passed the exangelino, the Panamanian Rod Carew, to equal Rickey Henderson with 3,055 hits.

It was the 50th game of his professional career in which Pujols, who went 4-3 with two runs and two RBIs, got more than a consecutive homer along with Justin Upton in the sixth chapter.

David Fletcher also provided a home run in the first inning against Mariners starter James Paxton, who left the game with low back problems after Pujols’ hit.

Paxton (8-4) conceded three runs and three hits in two-thirds of inning, which did not save him from defeat.

In other results of the day, Minnesota won 5-1 at Tampa Bay, and Baltimore lost at home 4-5 against Philadelphia in interleague game.