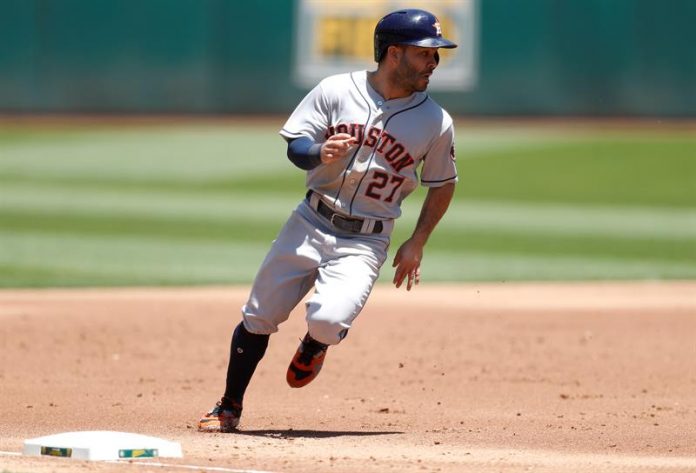 The second Venezuelan baseman Jose Altuve shone with the bat when hitting an unstoppable, that allows him to take hold in the undisputed leadership and in the second place of the batting average of the Major Leagues after concluding another day more as the most outstanding Latin American baseball player.

While on the mound, in duel of Latin American serpentine, the Colombian starter Jose Quintana beat the Dominican Francisco Liriano.

Altuve hit unstoppable for the Houston Astros, who won at home 4-5, in the tenth episode, to the Texas Rangers after completing a comeback.
With high sacrifice Evan Gattis pushed the register to Altuve, who scored the race that sealed the victory.

Altuve, who went 5-1, achieved his unstoppable 115 so far this season with a single in the tenth inning and consolidated the lead in that statistical category.
The Venezuelan baseball player surpasses his closest supporter, the Dominican shortstop of the Seattle Mariners, Jean Segura, who has 110.

Altuve left his batting average at .332, the second-best in the majors, behind only Mookie Betts (.338), of the Boston Red Sox.

Quintana beat Liriano and the Chicago Cubs beat the Detroit Tigers 5-2 in an interleague game.

The Colombian pitcher left in 4.03 his average of effectiveness, after facing 27 batters with 107 shipments, 58 of strike.

In the offensive game, once again the prominence of Puerto Rican second baseman Javier Báez and Venezuelan wide receiver Wilson Contreras was decisive in the victory of the Cubs.

Báez returned to show his “magic” at the time of sliding to the plate rubber and Contreras hit a home run that broke the tie on the board to open the path of triumph for the Cubs, who achieved the sixth consecutive.

The Venezuelan starter Eduardo Rodriguez worked six episodes and led from the mound the triumph of the Boston Red Sox, who won 0-3 to the Washington Nationals.

Rodriguez (10-3) scored the win in six innings, allowed three hits, gave a base and retired via the punch.

Panamanian third baseman Johan Camargo hit a four-corner hit for the Atlanta Braves, who lost 2-6 to the New York Yankees.

Camargo (9) hit back in the sixth inning with no runners ahead by overcoming the serpentine of stellar starter C.C. Sabathia

Villanueva (17) sent the ball into the street in the second inning with a runner ahead of starter Sean Manaea’s job, with no outs in the inning.

Muñoz (4) hit four corners in the seventh, only against the Japanese relay Yoshihisa Hirano, without outs in the inning.

While Molina (13) connected in the seventh with two riders ahead on the work of the Mexican relay Fernando Salas.

The Venezuelan third baseman Eduardo Escobar hit the whole back for the Minnesota Twins, who lost 2-3 against the Milwaukee Brewers.

Escobar (13) blew the whistle in the ninth, with no runners ahead, against closer Corey Knebel, with no men in circulation.

Dominican Ranger Gregory Polanco sent the ball into the street for the Pittsburgh Pirates, who were outscored 4-6 by the Los Angeles Dodgers.

Polanco (12) threw it in the eighth with a partner on the trails, against the Dominican relay Edward Paredes, with one out.

Moncada (11) punished with a four-cornered hit in the third inning, leading a runner in front of Romano’s pitches, which had already scored two outs.

For the Reds the shortstop Venezuelan Jose Peraza drove two runs
Dominican closer Jeurys Familia scored a save in the triumph of the New York Mets, who beat the Toronto Blue Jays 3-6 at home.

Familia (16) worked a perfect episode and got his 16th save in 20 chances.

The young Mexican reliever Víctor Arano did a great job from the mound and helped the Philadelphia Phillies triumph that prevailed of locals by 4-1 to the Orioles of Baltimore, in game of interleague.

Arano, 23, worked the final two innings of the game without allowing scoring, walked one and fanned three batters to get his first major league saves.