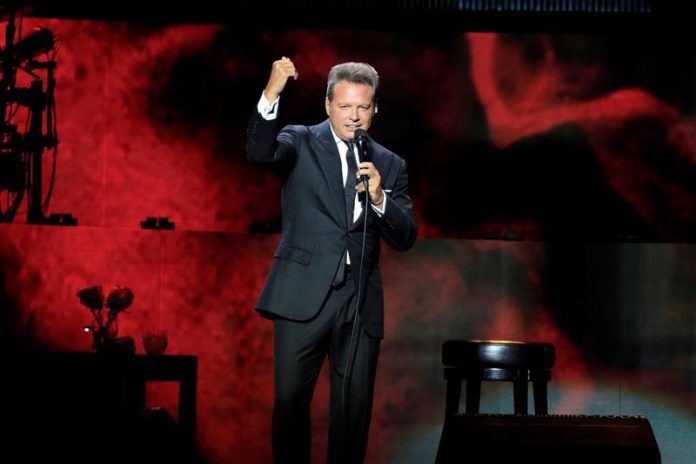 “For that, love, give me warmth”, as the song says, he has asked Luis Miguel today for a Spain frozen by the elimination in the World Cup in Russia and for the overclimatization of his concert, to which the “Sol de México” he has responded by embracing his heart and desire as if there had never been bad times.

At 10 pm, amid some complaint from the public about the 30 minutes delay that must be stipulated in the manual of the perfect redivive divo, his appointment has started with a full capacity of 12,000 people, especially followers of the age of the star who attended group to the “Wi Center” (WiZink Center) with Mexican hats, t-shirts with the face of their idol or the galas of an afternoon in the Real.

A Madrid, first stop of his first tour of Spain in 6 years, has come after its most ill-fated, with abandoning concerts, cancellations and scandals by lawsuits, and starring then a certain resurgence thanks to the Netflix series that recreates his life and the publication of the album “¡México por siempre!”, 7 years after its last record release.

The transcendence of both factors has become clear in a repertoire that in its second part has been a song to the country of adoption of Luis Miguel, with its classic accompaniment of mariachis, but that in its first section has influenced almost bibliographic spirit in all its epochs

It can not be coincidence, for example, that it sounded “Guilty or not”, song of 1988 that, following the success of the television series, became one of the five most listened to in Mexico in the platforms of “streaming”.

His entry into Madrid could not be more epatante under an astracanada metal winds, stuffed in his impeccable black suit and his eternal tan, arched brow and dry stop the music to step on the center of the stage, causing a reaction almost Pauloviana of the public, standing for a few minutes.

“Well, it’s older, but very good”, commented some of the attendees among this 48-year-old divo who has started, as in his previous commitments, with “Si te vas”, wrapped like the melodic stars of yesteryear, with a band of eight musicians, three choristers, vertical leds and pantallón from side to side of the stage.

Exorcising the days of cancellations, Luis Miguel has shown attitude and the vocal temper of yesteryear in a start that has also included “You alone,” “Love, love, love” and “Give me back love.”

The first chords of “Beneath the table” have ended by liquefying the wishes of the respectable one, in a unanimous sign of taste, he has listened to “No sé tú” afterwards, in a first aperitif of the boleros that made him the gallant Latin by antonomasia in the anteroom of the new century.

The hands of the clock have gone back to the axis between the 80s and the 90s so that they could sound in the format of vitamin potpourri such themes as “A man looks for a woman” or “Question of skin” first, “Lover of love”, “Beyond all “,” Cold as the wind “and” I have everything except you “later, with electric guitar arrangements.

“Luis Miguel, Luis Miguel!”, He has cheered the mass at the equator of the show, before facing Roberto Cantoral’s classic “La barca” or “El reloj” by Armando Manzanero in a continuous sea of ​​arms held high has not declined with the romantic “Hasta que me olvides”, from his album “Aries” (1992).

The “mash-up” has been a regular resource in these two long hours of concert and more than 30 songs. Of him he has thrown again when it has been back in the early 80s with “You can not leave me like this”, “Word of honor” and, of course, “The unconditional”, which can not be missed, after the umpteenth hormonal outbreak when his tie has loosened.

The term waste could define the evening, especially when it has begun to recreate unnecessary gorgoritos, as in the final dialogue with the saxophone in “You and me,” which, on the other hand, has continued to be approved by his army.
As for the words, Luis Miguel has let his smile of radiant white speak for him.

“It gave me a headache”, he joked in a more relaxed attitude, in a vest and with his shirt unbuttoned, after holding a note during “Contigo en el distancia”, supported only by the piano, in one of the climaxes of the night and just before the appearance of 14 mariachis that have completely revolutionized the site.

With them he has tackled the last section, in which three songs of his last album have been played, “La fiesta del mariachi”, “Llamarada” and “El balajú / Huapango”, as well as another inescapable classic, “La bikina”, rediviva like him thanks to the recent version of the Operación Triunfo contest, something that has not gone without effect tonight.

In that hullabaloo has reached midnight, in time for “You know something” and the usual encores with songs like “Decide,” “The girl in the blue bikini” and, of course, “When the sun warms,” which, in the case of the Mexican king, will return tomorrow in Madrid for a second concert.

Later, also in Spain, it will re-emerge on July 5 at the La Cartuja stadium in Seville, on the 7th at the Nueva Condomina stadium in Murcia, on the 8th at the Palau Sant Jordi in Barcelona, on the 11th at Starlite Marbella (Málaga), on the 13th at the Cap Roig festival in Girona and the 14th at Marina Sur, in Valencia. Javier Herrero.