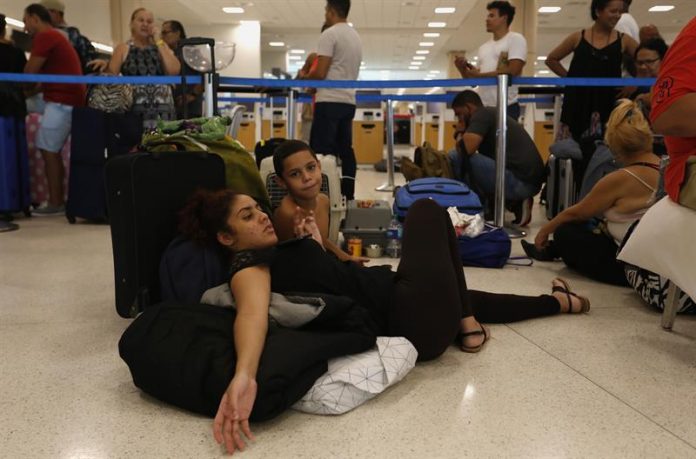 The Puerto Ricans are “slowly emptying” their island and the “vast majority” of those who have migrated to Florida as of 2012 intend to stay in the US, according to a study that reflects the impact of all kinds that can have on This state is a population that is about to reach Cubans in number.

According to a study released today during the symposium “Our Future”, organized by the International University of Florida (FIU) and the Puerto Rican Alliance of this state, the Puerto Rican population has been growing “dramatically” since 2012 due to the crisis economic of the island.

“The survey documents an emptying of Puerto Rico that should worry,” Eduardo Gamarra, professor at FIU and one of the authors of the study, told Efe.

He said that although the survey focuses on the “significant exodus since 2012” towards Florida, it also shows the “negative demographic growth” that Puerto Rico has had since that same year.

“There are more people who leave the island than it stays,” he said.

Gamarra noted that while in Florida the passage of hurricanes has meant in a certain way a subsequent boom, for example in construction, in Puerto Rico it is “a prolonged crisis that reflects the lack of interest of the government on the island.”

The expert said that the official projections of Puerto Ricans can reach 1.2 million this year in Florida and reach the Cubans, and noted that 55.9% showed their interest to stay “indefinitely.”

According to the survey, conducted with a sample of 1,000 islanders, 77.2% arrived after 2012, especially due to the economic crisis, and as of 2017 were added others affected by Hurricane Maria that hit Puerto Rico last September.

“It’s a population that has been growing dramatically since 2012 and that has the potential to affect the economy, and finally the electoral issue,” said Gamarra.

He said it is “significant” because in a short period they are about to go into a Cuban historical exile that has grown over sixty years, and also the Puerto Ricans will not have to wait a long time to influence the elections.

The forum, also organized by the Puerto Rican Leadership Council of South Florida, brings together state and national political, academic and business leaders, including the representative of Puerto Rico in the US House of Representatives, Jenniffer González, to examine the role that Puerto Ricans will play in the future of Florida.

“It is a new population that is in Florida and will have a significant impact in several places,” said Gamarra.

The study details that 61% of Puerto Ricans have established themselves especially in the so-called Interstate 4 highway corridor, which crosses the center of the state from east to west and coincides with Hillsborough, Osceola and Orange counties.

Meanwhile, another 22% reside in Tampa, 11% in Miami and 6% in Fort Lauderdale, the authors of the analysis, Gamarra and professor Jorge Duany, said at a one-day symposium held at FIU.

These immigrants, who in 77% had family in Florida before reaching the state, left the island for lack of employment (19.8%), in search of a better quality of life (18.3%) and due to the precarious economic situation after Hurricane Maria (10.6%), they detail.

On the other hand, ignorance of the English language appears first in the list of the difficulties facing Puerto Ricans in Florida (18.6%) followed by the lack of employment (15.4%).

Gamarra also noted that the poll reflected a “historical” electoral trend that links Puerto Ricans with Democrats, but also showed a significant percentage of independent candidates.

The Puerto Ricans surveyed said that 56.6% are more likely to vote for Democratic candidates, 7.1% for Republicans and 24.2% for independents.

Gamarra explained that Puerto Ricans have a high voting rate on the island, which can now be moved to Florida.