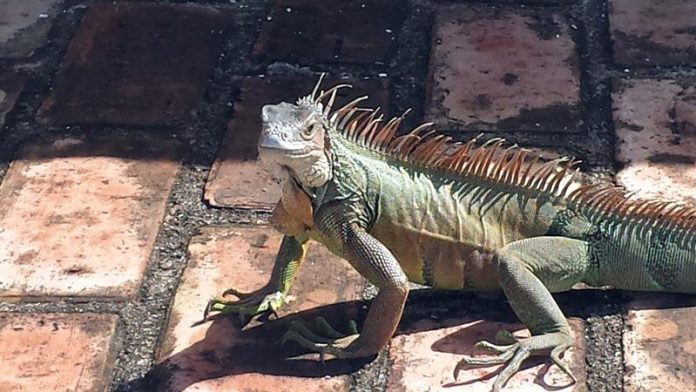 The overpopulation of green iguanas in southeastern Florida, especially in Miami-Dade, Palm Beach and Broward counties, has set off alarm bells among experts, who point out that this invasive species is out of control.

“This year we have seen more iguanas than any other in the last nine years, with hundreds and hundreds of thousands of this species” out of control in southeast Florida, Thomas Sunual, owner of the company, told the Sun Sentinel newspaper today. Iguana Control company.

This non-native species of Florida has found in the subtropical climate of the south of the state an ideal habitat for its rapid proliferation, to the point that they are visible on sidewalks, patios of houses, trees, piers and docks or in open areas of grass taking the Sun.

The Commission for the Conservation of Wildlife and Fisheries (FWC) of Florida warns on its website that these reptiles can cause “damage to the vegetation of commercial and residential areas and even the infrastructure when digging burrows that come to collapse sidewalks, foundations, walls and channels “.

In fact, iguanas have become the second cause of electricity loss in South Florida, behind only the squirrels.

Although there is no accurate estimate of the number of iguanas released, the number could be “gigantic,” according to Richard Engeman, a biologist with the Wildlife Research Center, a branch of the US Department of Agriculture.

Portuallo explained that his team uses compressed air guns to eradicate iguanas, which are shot in the head.

“We do not shoot to hurt them, but to kill them in the act” and comply with the law to avoid the suffering of animals, said the expert.

According to state law, it is legal to eliminate the iguanas with a shot or a shot in the head with a pellet gun; It is even permissible to decapitate them, but not drown them, freeze them or make them suffer with the use of rat poison, which causes them a slow and painful death.

This native species from Central America, South America and the Caribbean was detected for the first time in Florida in the 1960s, specifically in Miami-Dade County, although today it extends to at least a dozen counties.