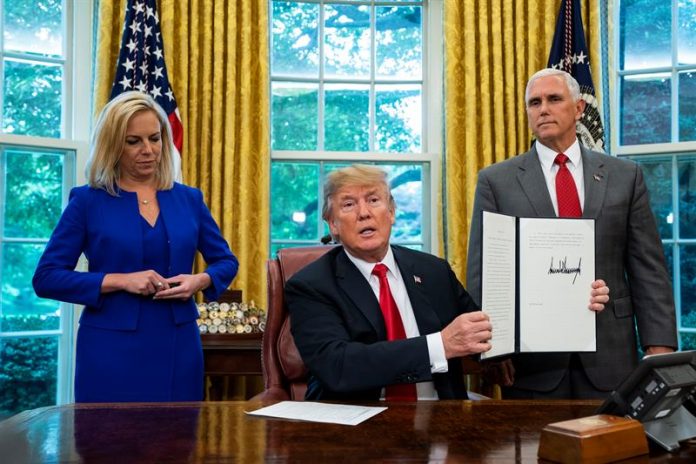 The president, Donald Trump, tried today to stop the flood of criticism with a decree that ends the separation of immigrant children from their parents on the southern border, but does not resolve the situation of the more than 2,300 children who have already been away from their parents.

Instead of being separated from their parents when crossing the border, as it has been since April, from now on undocumented children will be detained indefinitely with their families in immigration detention centers, according to the order signed by Trump.

“I did not like to see the separated families nor the feelings that this provokes”, assured Trump when initiating the decree.

The president did not need to use his executive power to end the separation of families: He could have done it with a simple call to his attorney general, Jeff Sessions, in which he ordered him to stop or modify the policy of “zero tolerance” against immigration illegal, that caused the problem.

That policy, formally inaugurated in April, leads to criminal charges against any adult who crosses the border with Mexico irregularly, and the initiation of that process through criminal proceedings led to separating them from the children with whom they had traveled.

But Trump did not want to end that policy, which has led to the separation of at least 2,342 children from their parents since May and, instead, chose to order that families begin to be admitted into immigration detention centers or other facilities. available to the federal government.

The decree even opens the possibility of detaining immigrants in military bases if necessary, something that was rumored since May and for what is being considered, according to press reports, three facilities in Texas and one in Arkansas.

“We will maintain a powerful frontier and there will continue to be zero tolerance,” Trump said.

The president acknowledged that both his daughter Ivanka and his wife Melania “had many feelings” about the separation of the children and have communicated to them in recent days.

“The dilemma is that if you are weak, the country will be flooded with millions of people, and if you are strong, you do not have a heart, maybe I prefer to be strong, but it is a difficult dilemma,” Trump said.

Throughout the last week, Trump had argued that the only one that could end the separation of families was the Congress, and today he insisted that he is still waiting for a change in the country’s immigration laws that includes funds for the wall.

The Democratic opposition believes that the Trump government decided to criminally prosecute the immigrants and separate the families precisely to force Congress to compromise on their immigration priorities, in addition to deterring the undocumented from entering the US.

Be it true or not, Trump has managed to return the immigration debate to Congress, and the House of Representatives will vote on Thursday on bills that would grant funds for the wall with Mexico, in addition to addressing the situation of the so-called “dreamers”, undocumented youth who came as children to the country.

Trump’s decree has an uncertain future, since it contravenes an out-of-court settlement known as “Flores”, which the government of Bill Clinton committed in 1997 and which prevents the authorities from depriving undocumented minors of liberty for more than 20 days. detained at the border.

Therefore, the Department of Justice plans to ask a federal court in California to modify the so-called “Flores agreement” so that the Trump government can “keep the families together throughout the judicial process” regarding the criminal charges or proceeding. of deportation, according to the decree.

The counselor of the Attorney General, Gene Hamilton, defended today that Trump’s order is “clearly legal”, and said that, despite its recourse to the courts, the White House prefers that Congress approve a law that ends with the ” Flowers agreement. ”

Trump’s decree does not resolve, moreover, the situation of the more than 2,300 children who have already been separated from their parents, because the Government does not plan to facilitate family reunification.

“This will not apply to existing cases,” said Kenneth Wolfe, a spokesman for the Department of Health and Human Services – under whose custody the children are – to The New York Times.