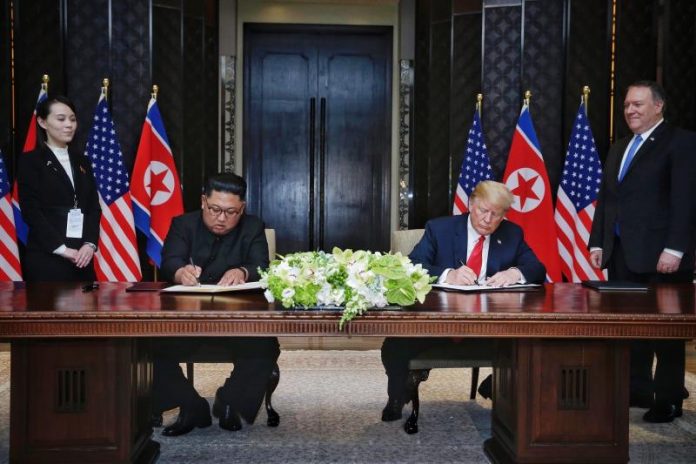 After almost seven decades of tense enmity, the United States and North Korea today opened a new chapter in their relations with a summit in which their leaders agreed that Pyongyang will abandon its nuclear program while Washington guarantees its survival.

US President Donald Trump and North Korean leader Kim Jong-un starred in Singapore yesterday, under the watchful eyes of the world, the first summit in the history of the two countries and managed to leave behind the tensions of the past to seal a minimum agreement of just four points.

The two leaders, who met for more than four hours at the Capella Hotel on the island of Sentosa after months of tortuous negotiations that feared the outcome of the meeting, were finally able to sign a declaration in which they undertook to develop new relationships for “the promotion of peace, prosperity and security”.

“President Trump is committed to offering security guarantees to the Democratic People’s Republic of Korea (official name of North Korea), and President Kim Jong-un reaffirmed his firm and unwavering commitment to the denuclearization of the Korean Peninsula.” says the joint statement.

The agreement, which ends with the latest legacy of the Cold War, establishes that the negotiations between the two countries will continue, but does not provide details or a timetable for the Pyongyang denuclearization sought.

“This vague and idealistic document does little to solve the complex issue of North Korea’s disarmament, it does not set a timetable or clarify what security guarantees offer,” said analyst David Kim, who worked in the department of State during the Administration of Barack Obama.

In this regard, the experts recalled that there has been no mention of Washington’s insistent demand to demand a “complete, verifiable and irreversible” denuclearization, and that it seems that Pyongyang’s claim that the disarmament process is being carried out has been accepted. by phases.

What seems indisputable is that Kim Jong-un has managed to get Trump, who has qualified him today as “smart man” and “with great personality”, to legitimize his regime and guarantee its permanence in exchange for an imprecise commitment on its nuclear weapons .

As a concession to Washington, the agreement, in which there is no mention of human rights, reflects Pyongyang’s commitment to recover the remains of some 6,000 prisoners of war or missing in combat in the Korean War (1950-1953).

During a press conference held after the summit, which has attracted some 2,500 journalists from around the world to Singapore, the US president defended the result and said that he has not given in “anything” and that the important thing is to understand that “the process is going to start now. ”

In this regard, Trump, who acknowledged that achieving denuclearization “scientifically will take a long time,” insisted that economic sanctions against North Korea will continue as long as the regime does not dispose of its atomic arsenal effectively.

Pyongyang faces tough unilateral and multilateral sanctions (UN resolutions) over the past decade on account of its repeated nuclear and missile tests.

As for the security guarantees offered to the North Korean dictator, the White House tenant was surprised to announce that he will suspend military maneuvers on the Korean peninsula that he regularly conducts with Seoul.

Trump said that these exercises, which Pyongyang considers as invasion tests, are “very provocative”, in addition to “tremendously expensive”, and affirmed that “under the current circumstances, it is inappropriate to conduct war games” and that the suspension of them “It’s something you’ll appreciate” North Korea.

Although it was raised as a possibility before the summit, the president ruled out that for the time being they are going to withdraw or reduce “the military capabilities” of the United States in South Korea, where Washington maintains deployed some 28,500 troops.

The announcement of the suspension of the exercises caught the government of Seoul by surprise, a great driver of this melting stage, and a South Korean military spokesman said that for the moment they are “trying to understand the precise meaning and intention in the comments of Mr. Trump. ”

However, the South Korean president, Moon Jae-in, described as “successful” the result of the historic summit held in Singapore and thanked the protagonists for their “courage and determination”.
By Ramón Abarca