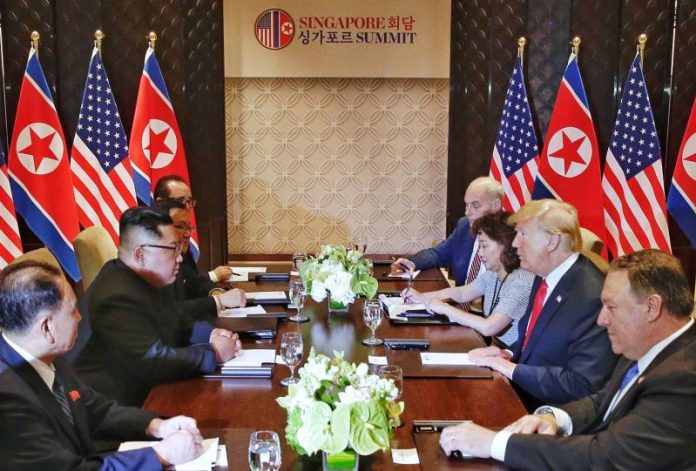 By clicking, counts the download In what has been an amazing transformation, North Korean leader Kim Jong-un has gone from being considered a mad dictator and an international pariah to emerging as a skillful strategist capable of negotiating face to face with the US.

His new status reached its peak in Singapore today with the summit he starred with US President Donald Trump, the first in history between the two countries.

Kim, who has managed to convince Washington to guarantee the regime’s permanence after today’s meeting, has even appeared during the negotiations to be a more stable leader than the unpredictable tenant of the White House.

Trump himself has described him today as a man of “great personality”, “very intelligent” as well as a “good negotiator” who “loves his country very much”.

Son and grandson of implacable tyrants, the third member of the media dynasty came to power as a twenty-year-old in December 2011, but it was this year that he managed to turn around that image of a voluble dictator who frightens the world with launches of missiles and nuclear tests.

Marshal Kim, who since he inherited the position until last March, when he traveled to China, had never gone abroad, now lives a diplomatic opening stage while cultivating his image as a statesman.

As with almost everything that surrounds the opaque Pyongyang regime, the exact date of the birth of the “great leader” son, Kim Jong-il, and grandson of the country’s founder, Kim Il-sung, is not known, but it is believed that I could be between 34 and 36 years old.

Lover of basketball and action movies, the young leader speaks English, German and French, thanks to his education in a school in Bern (Switzerland), which he went undercover and under the control of numerous North Korean officials between 1993 and 1998.

Perhaps because of her youth or her western education, Kim has shown a clear tendency to modernize the image and customs of the country with gestures such as creation as soon as she reaches the power of the Moranbong girls band, similar to the K-pop groups of South Korea.

In contrast to his predecessors, Kim Jong-un has also given a public role to his wife, Ri Sol-ju, with whom he is believed to have two or three children, and who accompanies him in numerous events and activities, such as his first trip to China and international premiere last March.

The current leader, responsible for loud purges and accused of ordering the murder of his stepbrother, Kim Jong-nam, came to power being almost unknown to the North Koreans after the death of his father on December 17, 2011.

In addition to a visible overweight, the leader – who at first was unsafe and reluctant to appear in public – has been acquiring over the years a stronger presence and an obvious resemblance to his venerated grandfather, who experts say he tries to emulate to get the respect of his subjects.

Most of the information about his private life is known or through the intelligence services of Seoul or the extravagant visits he has received from former NBA player Dennis Rodman, who has described him as a “funny” man, “smiling” “and” family “.

Heavy smoker and harsh voice, Kim was imposed in the line of succession to his older brothers, Kim Jong-nam and Kim Jong-Chul, after the two were discarded as they were considered unprepared for power, one for too Western and the other because of his lack of interest in politics.

While the flagrant violations of human rights have remained the norm in the North during his leadership, the supreme commander of the Korean People’s Army and president of the Workers’ Party has placed special emphasis on its arms program and economic development.

Although he has now committed to renouncing his atomic arsenal, Kim Jong-un’s government has stepped up its commitment to the nuclear charter for which the previous leader has already chosen as life insurance for the regime.

In addition, the period in power of the third of the Kim dynasty has been marked by a sustained growth and a palpable improvement of the economic situation, despite the harsh penalties.