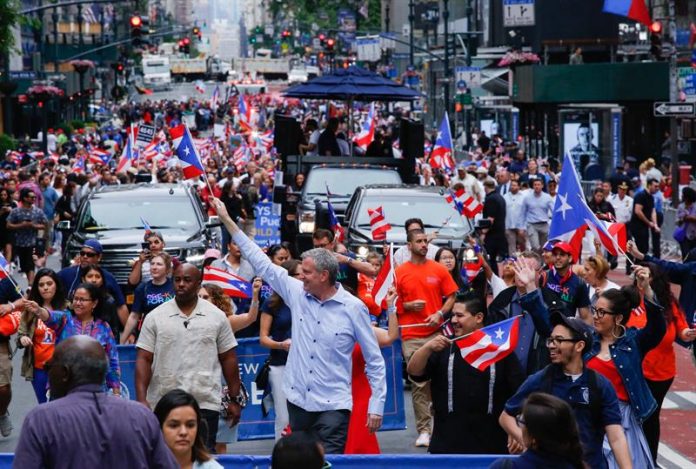 The traditional Puerto Rican national parade in New York was the scene today to remember that the Caribbean island continues its fight to recover after the passage of the devastating hurricane Maria and pay tribute to the dead that left in its wake.

Hundreds of thousands of Puerto Ricans, from different parts of the country, gathered as they do each year along the famous Fifth Avenue to proudly celebrate their contributions to the United States, but also to remember the 4,645 Puerto Ricans who allegedly lost their lives. life as a result of the hurricane, in September of last year, according to a study.

Harvard University, in collaboration with the University of Puerto Rico, made a report, published last month in the scientific journal New England Journal of Medicine, which reveals that 4,645 Puerto Ricans may have died, well above the 64 who had recognized the Government of the island.

To the sound of salsa and great hullabaloo, the 61st edition of the parade, the first after the hurricane, began headed by his great marshal, the actor Esai Morales, the ex-Yankee Jorge Posada as his godfather and other figures, including the first heroes who responded immediately to the recovery, to whom tribute was paid this year, under the slogan “one people, many voices”.

“Puerto Rico gets up”, “4,645 lives, but not forgotten”, “resistance”, “respect and justice for Puerto Rico” or “Puerto Rican, vote to be respected” were some of the messages that were seen throughout the travel, both on banners and printed on T-shirts.

Thousands of flags of the island, red, blue and white, waved again on both sides of the avenue in the hands of the Puerto Ricans who raised them with fury to the cry of “Puerto Rican!” or the refrain of “I am Boricua for you to know”.

Nora Ortiz and her daughter were among that group and arrived three hours before the massive event began, which took place under extreme security measures.

“My purpose of arriving early was to have a good place to see which politicians come (in solidarity with the island). Also because there are people confused, I want them to know that Puerto Rico is part of the United States, that we are citizens, people forget about that, “he said in the middle of the hustle and bustle, the salsa music, reggaeton and bomba and full of folklore.

Ortiz referred to the claims of Puerto Ricans to what they have denounced has been the poor response of the administration of President Donald Trump to citizens of this country, and that today was denounced again by politicians such as the president of the Bronx district, Ruben Diaz.

Díaz, of Puerto Rican origin, wore a black T-shirt with the printed “4.645” under which read “Remember,” “Register” (to vote) and “Resist” and directed his criticism against the Trump administration. 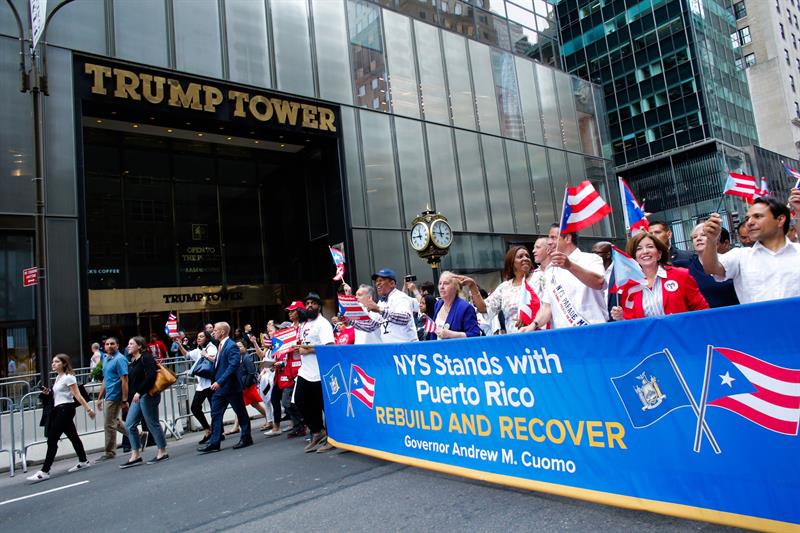 “We have to remind the world that this president has failed the 3.5 million citizens who continue to suffer, those who have not given resources, who do not have medicines, who do not have what they need to improve their lives,” he said. to the press.

He recalled that “this is a government that has depended on Puerto Ricans for various wars, that gives resources to other countries that are not even our friends, but does not want to give those same resources to Puerto Ricans and we have to protest.”

Among the thousands of people who marched, which included Mayor Bill de Blasio and other officials, there were those who showed the flag of Puerto Rico in black and white, before mourning the deaths and the situation that crosses the island.

Also voices of those who are calling for an audit of the debt of 72,000 million dollars that has led to bankruptcy in the country.