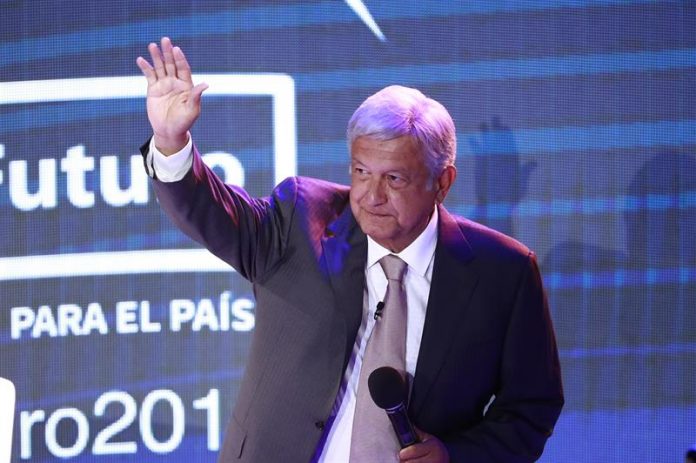 The leftist leader Andrés Manuel López Obrador heads the intention of the vote for President of Mexico with 37% and his expectation of victory in the elections on July 1 reaches 46.7%, says a survey released today by the company Consulta Mitofsky .

In second place was the conservative Ricardo Anaya with 20.3%, in front of 17.1% of the official José Antonio Meade and 3.2% of the independent Jaime Rodríguez, with 22.2% of people who did not respond survey, the survey indicated.

Consulta Mitofsky explained that after eliminating people who do not declare their intention to vote, López Obrador has 47.8 effective voting preference against 26.1% of Anaya, 22% of Meade and 4.1% for Rodriguez.

Between early May to June 4, López Obrador went from 33% to 37% and Meade grew 2.6 percentage points, both increases from the resignation of the independent candidate Margarita Zavala and the reduction in the percentage of people who do not declare in the survey.

Meade is the presidential candidate of the coalition of the ruling Institutional Revolutionary Party (PRI) with the Green Ecologist of Mexico (PVEM) and Nueva Alianza (NA).

Consulta Mitofsky noted that 71% of those who support López Obrador say they are sure of their decision, compared to 64% of voters Meade and Anaya, variables that open the possibility that there is a strategic vote of citizens who can change of idea

In the final section of the campaign, which ends on June 27, 46.7% think that López Obrador will win the elections and the survey revealed that there is a 16% of people who believe that the winner will be both Meade and Anaya.

The survey was carried out from June 3 to 5 to 1,000 people with voting credentials through “face to face” interviews with a 95% confidence level and a range of error that does not exceed 3.1% , Consulta Mitofsky said.