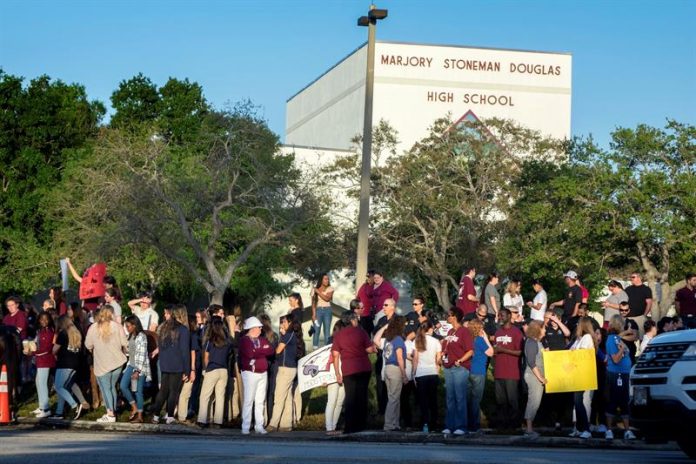 The more than 700 seniors at Marjory Stoneman Douglas High School in Parkland, Florida, on February 14, a shooting that took the lives of 17 people, had a bittersweet ceremony yesterday. graduation.

The act that was developed under strict security measures at the BB & T Center, in Sunrise, northwest of Miami, and which was not allowed access to the press, did not have Meadow Pollack, Nicholas Dworet, Carmen Schentrup and Joaquin Oliver, deceased in the massacre and those who were honored yesterday afternoon.

The ceremony, of which information has scarcely been passed on to the press, was not attended by relatives of those four last year students who lost their lives, among them Andrew Pollack, the father of Meadow Pollack, as well as Carmen Schentrup’s parents. , April and Phil, reports the local newspaper Sun Sentinel.

“It’s very difficult for me,” said Pollack, who last May and after a great effort was part of the prom.

Nicholas Dworet’s parents, Mitch and Annika, told NBC News that they were not sure if they could be part of the entire ceremony, and in fact they asked Alexandra Greenwald, a classmate of her son, to go up stage to pick up the diploma.

Nicholas had obtained a scholarship at the University of Indianapolis, of which he was to be part of his swimming team, with the desire to reach the Olympic Games 2020. For this reason, some of his teammates will wear a printed tribute mode. name of his son in the mortarboards.

The mother stated that although it is relatively easy to remember good times with her son, “it is very difficult to talk about things that she will not be able to do”.
Carmen planned to be a medical researcher and had been accepted at the University of Washington, Meadow was going to the University of Lynn, in Boca Raton (Florida), and aspired to study law, while Joaquin had in mind to study Marketing but not I had decided at what university.

The lives of all of them, and of 13 other people were blinded on February 14, when Nikolas Cruz entered that school, of which he was an alumnus, with a semiautomatic rifle AR-15 and unleashed a massacre of 17 people, among students and teachers.

The fact of blood gave rise to a national movement for greater control in the sale of weapons commanded by students of this high school and that organized a massive march in Washington.

A few days ago, it was announced that a group of Parkland parents has created a Political Action Committee (PAC) to bring about changes in the laws on weapons based on actions that interfere in electoral campaigns.

According to the PAC website Families Against Assault Weapons (FAMVARPAC), its mission is “to remove the National Rifle Association (NRA) from our political system and, once achieved, to amend the National Weapons Law of 1934.”

They hope to raise 10 million dollars through donations to, with these funds, make publicity contrary to the candidates who attend the next elections with the support of the NRA.

On the other hand, last Thursday the deadline was reached to apply as a beneficiary to the fund created in favor of the victims and victims of this massacre, which today has accumulated more than 8.7 million, of a goal of 10 million, delivered by some 36,400 donors.

Broward Education Foundation, which launched the initiative, reported that up to the closing date more than 1,600 people signed up, which were on school premises on the day of the event.

The authorities will begin this month to verify that the applicants are really eligible for the donation, which will be classified into four categories according to the impact, and it is expected that from mid-July the funds will be delivered.