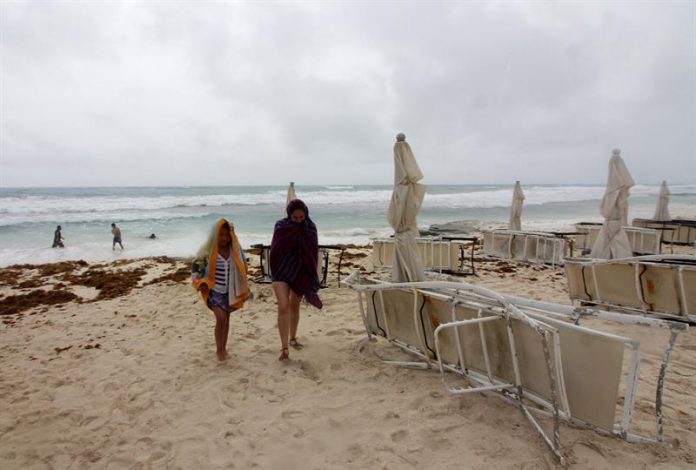 The subtropical storm Alberto, the first of the hurricane season in the Atlantic, continues its journey through the Gulf of Mexico and is expected to continue north between this night and Monday, reported the National Hurricane Center (NHC).

Alberto, who was formed a week before the official start of the hurricane season in the Atlantic, strengthened in the course of today to reach maximum sustained winds of 85 kilometers per hour (50 m / h) and, according to NHC, it expects “an additional strengthening” until the system reaches the north coast of the Gulf on Monday.

Of subtropical characteristics, that is to say with an asymmetric rain pattern and not around the center of the cyclone (like tropical storms), Alberto moves in a north-northwest direction at 19 kilometers per hour (12 m / h).

In the predicted trajectory the cyclone will reach the north coast of the Gulf of Mexico and on Monday it will touch land in the Florida Panhandle, in the northeastern end of the state, where heavy rains are expected, from which it will continue as a tropical depression towards the Valley of Tennessee.

The subtropical storm is located about 190 kilometers south of Apalachicola and about 265 kilometers west of Tampa, both in Florida, where the state of emergency in its 67 counties has been maintained since Saturday, while in Alabama it was effective from today. .

The NHC afternoon bulletin, based in Miami, has deactivated hurricane storm warnings for much of the west coast of Florida, as well as the tropical storm warning south of the Anclote River, also in the west of this state.

A tropical storm warning is maintained for the coastal strip that extends from the Anclote River (north of Tampa, Florida) to the border between the Mississippi and Alabama.

The storm has prompted Florida warnings of tornadoes and floods in Florida, where until Tuesday there are expected accumulations of water of more than 200 milliliters on the north-east coast, as well as in Alabama, while in central Cuba heavy rains will generate up to about 250 milliliters of water.

As in Florida and Alabama, the Mississippi Government has ordered that the National Guard be available.

The National Oceanic and Atmospheric Administration (NOAA) predicted Thursday that the hurricane season in the Atlantic, which begins on June 1, will have a “close” or “above average” activity, with between 5 and 9 hurricanes, of which between 1 and 4 can be of higher category.

The forecasts of the US agency with a view to the season in the Atlantic basin, which affects the United States, the Caribbean and Mexico for six months, also point to the formation of 10 to 16 tropical storms. efe