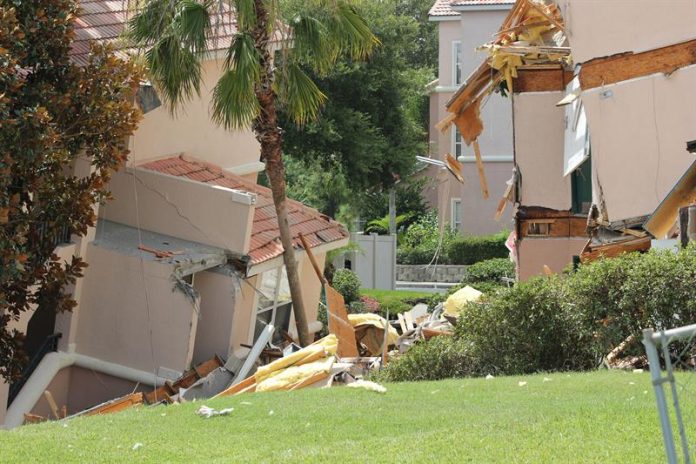 A simple creak of a door or a small furrow in the garden produces terror in the so-called “alley of the sinkholes”, a zone of the center-west of Florida where the “explosions” that take place in the subsoil engulf homes.

“My house is falling, I hear the crack and look outside and there is a huge hole in front,” a resident of The Villages, the central area of ​​the State of the Sun, told the emergency telephone number last February. sinkholes

There are almost two dozens of new holes of large dimensions that have emerged in the area near the town of Ocala (central Florida) since last April, a fact that has forced many families to leave their homes.

The victims of the sinkholes are powerless as land swallows home, but the worst comes later “when nobody gives you answers,” Sue Walters tells a local television channel.

“We’ve only been here for three years and I did not know there were any holes in. Of course I’m nervous and angry, we came here because of the wonderful way of life here and it’s not that nice now,” says Walters, one of those affected at The Villages.

With the start of the rainy season, the fear of what neighbors identify as “explosions” has increased in the well-known “alley of the sinkholes”, where sudden subsidence of land is, unfortunately, not new.

Florida records every year the largest number of sinkholes in the entire country according to the amount of water that floods the pavement.

According to the State Geological Survey, more than 400 sinkholes were reported after Hurricane Irma, which hit Florida last September.

However, experts say that the numbers are even higher.
“Many landowners do not report ditches, even if they are small, so their property is not devalued,” says James Olson, director of geology and geophysics at Geohazards Inc.

It is in the residential areas where the tunnels are most affected, since, unlike the construction of hospitals or shopping centers, where it is obligatory to make preliminary tests to check the safety of the subsoil, in houses and apartments there is no law that obliges thereto.

A lack of legislation that seems to have reached the White House, where this week saw a small hole in the outside lawn of the building.

It would have been always more likely that the holes appeared on the golf course or the garden of Mar-a-Lago, the president’s mansion in Palm Beach (Florida) because of the tropical climate of the area.

But it is on the west coast of the Floridian state where the geological composition of the subsoil has led to the nickname “alley of the sinkholes”.

Compared to the east coast of Florida, where the rocks on which the land sits have a depth of about 200 feet (60 meters), the rocks in places like Orlando, The Villages or Ocala are much shallower, between 5 and 20 feet (1.5 to 6 meters) underground.

That is why, although the rains affect the state of the Sun equally, the composition of the subsoil causes the accumulated water to saturate the land and is channeled into the existing cavities, causing earth movement.

“The rocky subsoil of Florida is much younger than the rest of the country,” says the geologist, who says that 30 million years “is nothing”, although it seems a long time.

The other states of the country “do not even follow” Florida with respect to the number of sinkholes suffered by their neighbors and, in Olson’s opinion, attempts to repair these holes are like “bandages” and do not remedy the problem at its roots.

“The more water we have, the more holes there will be, and we’ll probably have a sinkhole now.” The risk increases after the summer rains, “the expert warns.

Last July a large sinkhole of about 200 feet in diameter (61 meters) swallowed two houses in Land O’Lakes (West Florida), another case that puts at risk of turning the “alley” into an anguished “grand avenue” “of sinkholes. efe