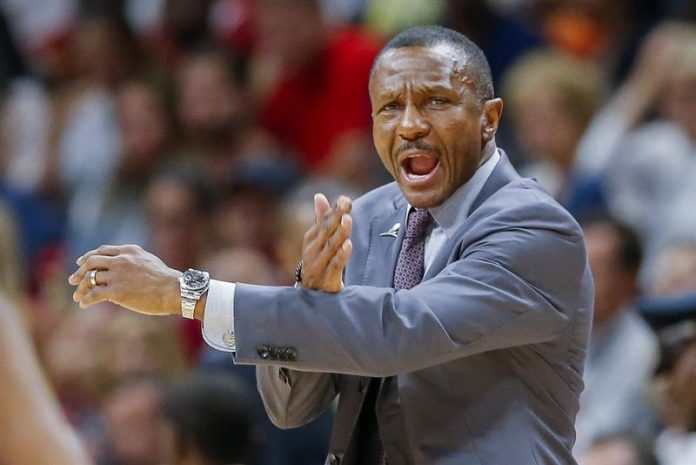 The great work done during the regular season of the NBA by the Toronto Raptors allowed its chief technical officer, Dwane Casey, to win the Michael H. Goldberg NBCA Coach of the Year award.

The election was made by the vote that the 30 coaches that run the NBA teams do annually.

The announcement made by the National Association of Basketball Coaches was made this Wednesday, two days after the Raptors were eliminated for the third consecutive time in the playoffs by the Cleveland Cavaliers.

This time they were left out with a humiliating 4-0 sweep, after the Raptors had the field advantage and reached the semi-finals with the best record of the Eastern Conference during the regular season (59-23), the best in the history of the team.

There is also a day after the starting point of the team declared that having had the best record of the Eastern Conference had not served at all and had been throwing a whole year in the trash.

Meanwhile, the president of the NBCA, Rick Carlisle, who directs the Dallas Mavericks, recalled that the award has one of the highest values ​​in professional sports because it is chosen by the coaches themselves, who know perfectly what is going on. he does in the competition throughout the season.

“Dwane Casey once again managed to make the most of the Toronto squad and managed to establish the best record in the Eastern Conference, congratulations to Dwane for the prestigious recognition,” Carlisle said in an official statement.

For his part, Casey, in a press conference with the president of the Raptors, Masai Ujiri, was grateful for the recognition and admitted that it was an honor to have received such a distinction from all the teammates.

“It’s something incredible and rewarding and I want to thank all my colleagues throughout the league for the recognition they have had towards me,” said the 61-year-old coach.

“I am also grateful for the great talent that exists within the four technicians who work with me every day within the Toronto organization.”

Casey has led the Raptors since the 2011 season and has led them to five consecutive appearances in the playoffs with three seasons in which they achieved at least 50 wins.

In addition to having surpassed the marks of equipment with its victories in three of the last four, but in the one of the 2017-18 it was the first that managed to have the best one of the Eastern Conference.

The best classification of the Raptors in the ‘playoffs’ was in the 2015-16 season when they reached the Eastern Conference finals and lost 2-4 to the best of seven against the Cavaliers with star forward LeBron James being his executioner .

Despite the success achieved in the regular season, the elimination has been seen by many analysts of the NBA as the end of Casey’s cycle with the Raptors, and for the moment the team, through its president Ujiri, has not confirmed that the new Coach of the Year has “guaranteed” its continuity within the franchise.

In the press conference that they offered today, neither of them wanted to talk about the future of Casey and they limited themselves to saying that their attention was now set on working towards the next university draw.

Although Casey made all kinds of changes in the lineup during the tie against the Cavaliers, none came to him and at the end he admitted that he understood that it could be the easiest goal if in the end the managers decided to make a change in the team management

“I know how this business works and I understand that I am the easy target, without it worrying me,” said Casey. “I think we are now closer to the Cavaliers’ level of play and the experience should serve us in the future.”

Now the big question in Toronto is whether in that better future of the Raptors is going to have Casey presence or on the contrary his position can be occupied by another professional, although he does not have the great honor of having won the new Coach of the Year award in the NBA.