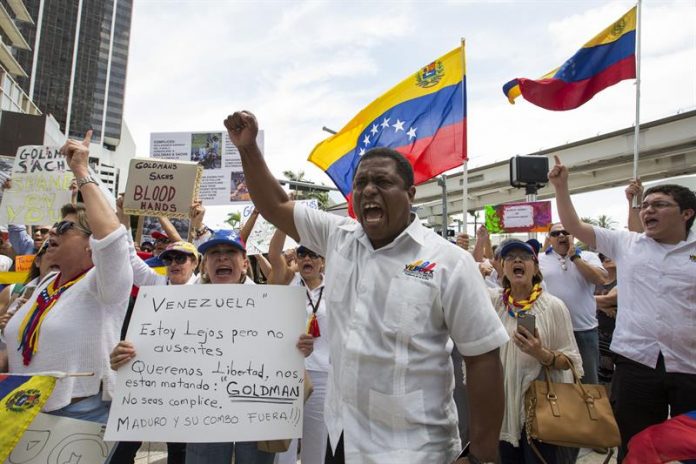 Dozens of Venezuelan exiles protested today in front of the headquarters of the consulate of their country in Miami, located in the financial district of Brickell, against the “boliburgueses” and the “plugged in” for their responsibility in the “destruction” suffered by Venezuela.

At the shout of slogans such as “Plugged, dragged, stolen a hungry people” or “Boliburgueses in flight, go to Cuba”, some 50 people gathered in front of the consular headquarters to express their rejection against the “officials of the regime” and “wealthy Chavistas”, especially those who have settled in the United States.

“While the people do not have medicine and suffer from hunger, those responsible live in the United States, a country they have criticized so much and which is home to thousands of refugees and political exiles,” the president of the Organization of Persecuted Political Exiled Venezuelans told Efe ( Veppex), José Colina.

The leader of this group, organizer of the rally, said the protest wants to draw the attention of the US authorities to those responsible for the destruction of Venezuela, many of them installed in South Florida cities such as Miami, Doral, West Palm Beach, and that “surely violated local immigration laws”.

“It is necessary to increase the trials of people who have been part of the debacle of Venezuela and to investigate those who have become rich and now live in the United States,” he said.

Colina pointed out that the political exiles in Miami plan to restart the “scratches” in front of the houses where ex-Chavez officials live and coordinate similar actions in countries like Spain, where there is also a “large number of Boliburgueses.”

The demonstrators took advantage of the fact that they were close to the Consulate of the Dominican Republic to advance that they will soon declare “persona non grata” to the president of this Caribbean country, Danilo Medina, “for his support of the Maduro regime,” according to the Veppex president.

This “title” is added to the others declared by this group to the former head of the Government of Spain, José Luis Rodríguez Zapatero, and to the Prime Minister of Trinidad and Tobago, Keith Rowley, for the deportation of 82 Venezuelans seeking asylum a week ago. on this Caribbean island.efe